The charismatic pianist Lang Lang presented his first solo recital in the area Thursday night at the Palladium, and the adoring response seemed a genuine acknowledgment of the recitalist's ability to form an instant bond with listeners.

The program was divided simply into Mozart before intermission, Chopin after. Lang Lang's arrangement of a Chinese folk song, in celebration of the Moon Festival in his homeland Sept. 19, provided one encore. The continuing roar of acclaim elicited a second, a predictably scintillating account of Chopin's "Minute" Waltz. 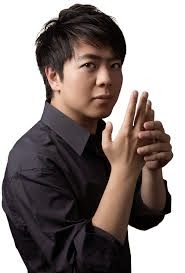 Then it was a few more relaxed bows, gracious waves to various sections of the audience, some handshaking along the front row and, in a superstar gesture if ever there was one, the toss of a large white handkerchief to some lucky fan after the young maestro had wiped his brow before strolling offstage for good.

Lang Lang's Mozart largely adhered to classical niceties without being particularly patrician. But Mozart the man had a mercurial temperament that is fairly reflected in his music, so the pianist's expressive palette was suitably broad. In Sonata No. 4 in E-flat, K. 283, he was generous with romantic inflections in the first movement, exploited sudden changes of dynamics in the linked minuets of the second, and evoked in the third the brilliant splendor of the European courts Mozart was acquainted with from boyhood. (The near-contemporary Sonata No. 5 in G, K. 283, was played first, reversing the printed program's order.)

The darker explorations of the Sonata No. 8 in A minor, K. 310, suited Lang Lang's love of musical drama especially well. The Allegro maestoso first movement had an almost intimidating authority, as if Sarastro from "The Magic Flute" were about to deliver an edict. This pianist, as notably in love with contrasts as he seems to be, reveled in the songful tenderness of the second movement before striding into the finale. Though the movement heading says "Presto," it was played too fast here, and even seemed a little glib, too pridefully tossed off. Still, there was something genuine and well-considered about the powerful ending Lang Lang came up with.

Like Lang Lang's tempos, intermission was a brisk, 10-minute affair. The four Chopin ballades then proceeded in order, each with Lang Lang's unmistakable stamp upon it.  By No. 2 in F major, Op. 38, the unsettling impression came over me that the dynamic extremes he favors ought to have seemed  generated more by the logic of the music, less for the sake of display: "Look how soft I can play, now look how loud I can play."

No one can deny that the Ballades have startling contrasts of mood, and Lang Lang's technical aplomb can make them seem startling even when you know the music. The "Presto con fuoco" outburst on the second page of the F major ballade, for instance, was produced with scarcely more lifting of the wrists than their position as the "sotto voce" opening section concluded.

Such sudden onslaughts, handled so adroitly, certainly rivet the attention.  Lang Lang is a versatile actor who gets quickly into character. But maybe the masks slip on and off a little too facilely. He isn't free of small-scale mannerisms, either. He delayed final notes in both Mozart and Chopin a few too many times; sometimes you should just end a movement in tempo.

I can't deny the excitement of being present for such virtuosity, both technical and interpretive. Ballade No. 3 in A-flat, op. 47, for example, had a woozy, elfin charm, with lots of impressionistic color foreshadowing French music of later in the century.

Lang Lang made it his own and won me over, but the electricity in the atmosphere when he plays such music would not wear well on repeated hearings, I suspect. So I'd probably pass up a Lang Lang recording of the Chopin ballades, but in this recital, the sway he held over those pieces made for a worthwhile in-person experience.