Down-to-here 'Hair' is no let-down after 50 years

As a theater director, Bob Harbin has evinced a knack for mounting big, intricate ensemble productions that manage a wide embrace without getting sloppy about it. 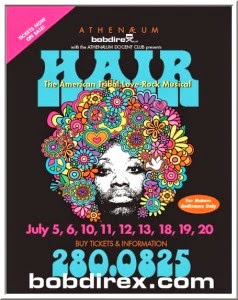 "Hair," the epochal "American tribal love-rock musical," is the latest in a Harbin series whose immediate predecessor, 2013's "Spamalot," will be fondly remembered by many. The site is once again the cozy, cavernous Athenaeum Theater on Michigan Street downtown.

In a building with links to iconoclasm (insofar as Kurt Vonnegut's grandfather was its architect), the BOBDIREX production overcame the limitations of a period piece, despite its classic status, and found new ways to be fresh. Harbin's large, energetic, multiracial cast — choreographed to a fare-thee-well by Kenny Shepard and well-prepared musically by Trevor Fanning, who also leads the onstage Mass Ave Electric Sunflower Band — got just about everything right.

On a starry, hard-to-describe (but not nondescript) set by Ben Asaykwee, the Tribe and its principals cavorted, protested and described themselves in the profane, rebellious songs of Galt MacDermot, James Rado and Gerome Ragni.

From the start, the production's wavy-gravy style of movement was inscribed on the cast's bodies, top to toe. "The Age of Aquarius," led with stentorian gusto by Rashida Bonds as Dionne, mixed and matched the Tribe in flowing, coalescing and dissolving patterns. Vintage-clothing shops around town must have had their stocks depleted in order to outfit this gang and permit such a kaleidoscopic presentation.

In song and dialogue, the  other principals deliver self-portraits following that famous curtain-raiser. Lincoln Slentz had the lively, annoying personality of Berger down pat.  Manipulative and selfish, Berger needs to have a tad of charisma without being too charming, and Slentz filled the bill. Tyler Ostrander's Woof, an amoral dealer in controlled substances, flips off conventional morality in "Sodomy." Hud (DeJuan Jackson) aggressively tweaks racial stereotypes in "Colored Spade."

The more anguished, uncertain tribal elders — the strong but vulnerable Sheila and the conflicted experimenter  Claude — were lent strong initial statements by Claire Wilcher ("I Believe in Love") and Anthony Snitker ("Manchester, England"). Claude's identity crisis will eventually deliver him to the enemy in a burst of dramatic irony that keeps "Hair" from becoming sappy about the counterculture.

The first act was the stronger of the two. In the second act, some timing and amplification problems blunted the rapid-fire satirical thrust of Claude's hallucination, a blend of history and popular culture. His bad trip has so many goofy elements that the slightest hitches become magnified: Surrealism — as the art of Salvador Dali and Max Ernst reminds us — has to be precise.

Though known for its lusty choruses, "Hair" also has some memorable solo numbers, most of them handled superbly in this production: As the tourist lady the Tribe dubs Margaret Mead, Craig Underwood put across "My Conviction" with the full force of enlightenment behind it. Wilcher got quickly to the heart of the lament "Easy to Be Hard" and steadily conveyed its message. Audrey Brinkley caught the wistful humor of Crissy's "Frank Mills," and Erin Cohenour as Jeanie feelingly led a small girl group deploring the quality of urban "Air."

The hippie counterculture reaches High Baroque stylization in this production. If anything is missing — despite the group-grope, touchy-feely staging — it's a pervasive sense that the Tribe has forged an emotional bond. The songs convey it, and there's plenty of collegial giggling at any expression of shared values.

But Claude's eventual apostasy should be the most wrenching of several signs that this youthful collective is vulnerable to the tensions of self-indulgence. It was not quite that in this production; it was just something sad — a downer after all that intense group energy. And communally processing a sad experience does not seem enough to let the sun shine in.
Posted by James Harvey at 4:18 PM