Friday night's ISO concert, with a fascinating guest soloist, evokes memories of a shining sham, a captious critic, and a cute cartoon

Two such pieces form the bulk of this weekend's Indianapolis Symphony Orchestra concerts: Rachmaninoff's Piano Concerto No 3 in D minor and Sibelius' Symphony No. 2 in D major.

I've scraped the barnacles off with difficulty in both cases. I was somewhat familiar with them decades ago, before the associations I'm about to relate complicated matters.

The Rachmaninoff was almost spoiled for me by the 1996 movie "Shine," a feverish biopic about the struggles of a manic-depressive Australian pianist named David Helfgott, played by Geoffrey Rush.

Well-received by eminent critics, "Shine" was enthralling but effortful, taking its place in a long series of Hollywood interpretations of classical music unfortunately suffused with a cheesy aura. We may be a popular art, moviemakers imply, but we know classiness when we see it.

"Shine" made of this piano concerto a work with the mystique of Mount Everest, when scaling that peak still seemed the height of earthbound human achievement — requiring extraordinary courage, thorough preparation, and good luck. I remember John Gielgud as the troubled pianist's London tutor, a kind of super-sherpa, repeatedly intoning the words "Rach 3" with vacuous reverence. The inanity of it overshadowed the entire portrayal, which was clearly beyond Gielgud's ken. It hurt to watch the great actor frankly not know what he was talking about.

"Rach 3" is undeniably demanding of the piano soloist, but many concert pianists will tell you the Brahms Second requires more stamina. The Russian piece is far from something unapproachable, though it seems to have been nearly so for poor Helfgott, whose recorded performance of it is wretched. But bumper crops of pianists continue to come into view who can command Rach 3; we have heard two of them recently with the ISO — Adam Golka and Yuja Wang.

On Friday, the Russian-American  Kirill Gerstein delivered the second of three performances of the work on his latest visit here, with guest conductor Andrey Boreyko on the podium. Gerstein refreshingly rejects any Russian proprietary right to Russian music, but the Hilbert Circle Theatre seemed to bask in whatever questionable advantage there might be in the collaboration of two Russian-born guest artists in a countryman's masterpiece.

The greatest charm of this concerto is the opening. It features the most inviting simple theme in the literature of virtuoso piano concertos. Rachmaninoff treats his inspired melody with care and without overemphasis, and thus it was played Friday night.

From here on and throughout, Gerstein showed a firm sense of the work's architecture and refused to shine only in its many moments of romantic afflatus. In the Intermezzo, he brought forth a fully expressive range of tone color, as the movement gathered inspiration for a smooth assault on the finale.

There Gerstein was the glorious monster everyone expects of pianists in music that sets this piece among the Himalayas. His power— with  full, balanced voicing of chords — made the desired effect, but he was also alert to the finale's episodes of elfin humor and tender reflection. The orchestra seconded the soloist's range of expression, though the performance wasn't the last word in pinpoint coordination. The mutual affinity of solo and accompaniment was never in doubt, however.

As for Sibelius' Symphony in D major, it used to leave me both (somewhat) moved and (mostly) bored. As a young newspaper critic reading older professionals and, in collected form, my esteemed critic forefathers, I came across Virgil Thomson's withering put-down of this work as "vulgar, self-indulgent, and provincial beyond all description."

I admired the clever dodge in those last three words and made note of the device: If you say a work of art is [insert negative words] beyond all description, you've told the readers you don't have to explain what you mean. Beyond that, I had to allow for the fact that the eminent composer Thomson had just become the New York Herald-Tribune's music critic when he wrote that review of a Philharmonic concert 74 years ago this month, and perhaps wanted to put a thumb in the eye of his counterpart at the Times, Sibelius champion Olin Downes.

Even so, Thomson's dismissal of the Sibelius Second gave me a little too much sanction to sneer at it. Since then, and particularly Friday night in the course of Boryeko's stunning results with the ISO, I've discovered solid grounds for the work's popularity — and reasons to admire it, in part. And I think I know what may have irked Thomson so much from the outset: That first movement indulges in Central European romantic rhetoric spun out of pretty insubstantial material. A partisan of the French tradition, Thomson clearly had no patience with throat-clearing derivative gestures in the self-important Austro-German manner.

The second movement (Andante, ma rubato) redeems everything that falls short about the first. The sad modal melody for the bassoons has more substance alone than anything offered by the preceding Allegretto; I can hardly believe that the Coffee Concert audience Thursday morning had to do without both of the first two movements. Everything falls into place in the Andante after the bassoons have their say, and there's not a wasted note. 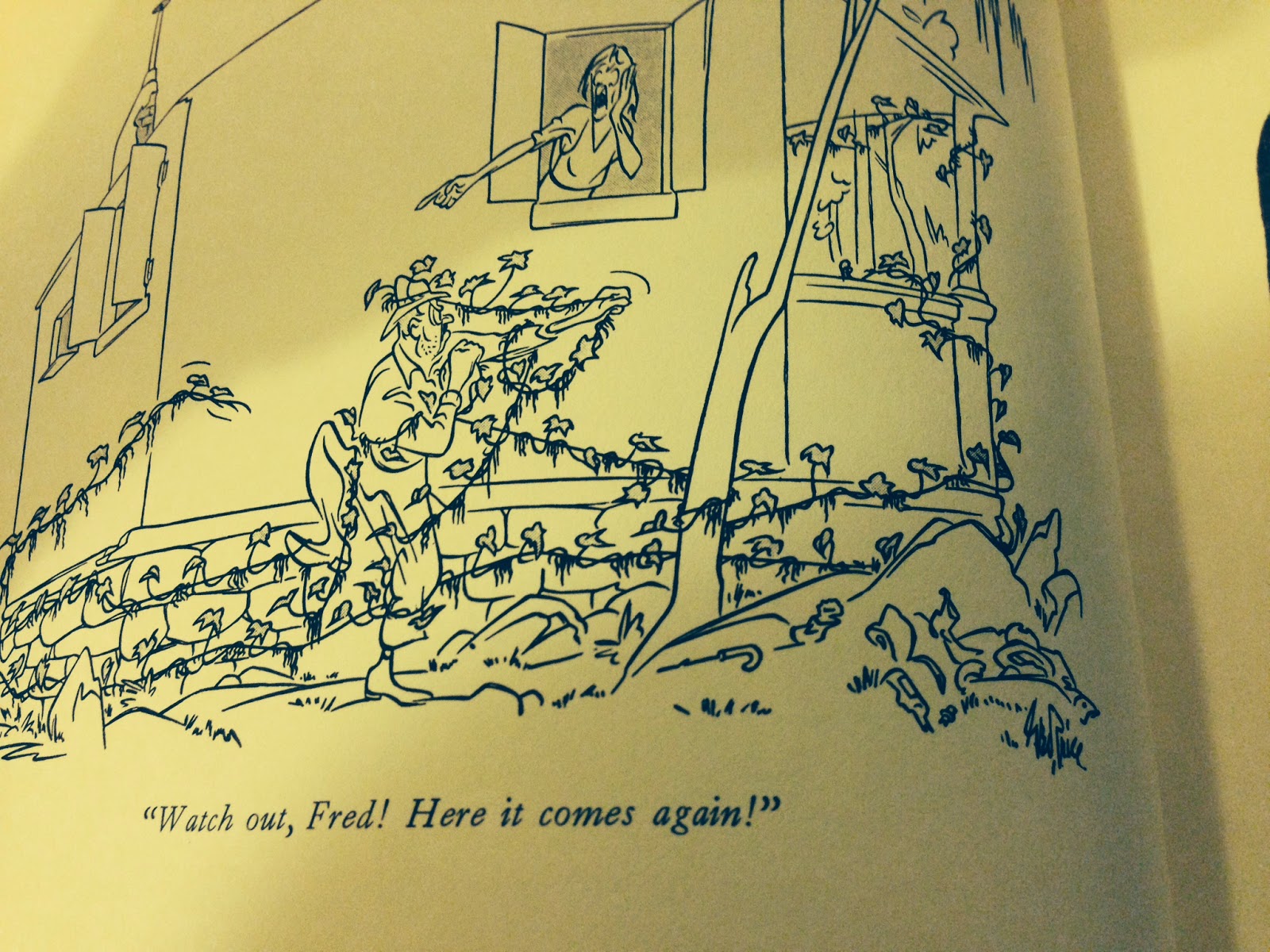 The bustling third movement, with its charming respite keyed to Jennifer Christen's enchanting oboe soloing, yielded with an encompassing sweep to the broad landscape of the finale. Kudos also to timpanist Jack Brennan for his exquisite dynamic control in the middle movements.

The finale, originally the locus of most of my hostility to the Sibelius Second, still tries my patience. It never fails to trigger my "uh-oh, here it comes again!" response, cheekily evoking an old New Yorker cartoon.

Sibelius' broad, anthemic theme and its fanfare-like co-conspirator undergirded by murmuring strings don't actually recur all that many times, but it always seems that way, Together, they are like the wriggling vine wrapping around the George Price house and the struggling husband.  Their brassy apotheosis at the end has my imagination seeing the homeowner finally engulfed in agony (like the Laocoon group)  by the relentless vegetation, as the scrawny, warning-weary wife collapses exhausted on the window sill.

The ISO program opens with a contemporary work, Anders Hillborg's "King Tide."  This picturesque water music — well-suited to its premiere venue, the Walt Disney Concert Hall in Los Angeles — focuses on dangerous high tides, which the world's coastal areas are destined to experience more of.

Since Debussy's "La Mer," musical depictions of the world's seas and oceans inevitably risk unfavorable comparison. Years ago, the ISO programmed a work by Gerald Levinson that seemed to set itself up as the anti-"La Mer": In contrast to the Frenchman's evocations of wind and light, the Levinson emphasized the dark, dense weight of the ocean, its impenetrable mystery. It was at least intriguing to listen to; it must have been unrewarding to play.

Hillborg's work takes a middle course, ultimately more successful, even considered as absolute music. Besides, it may be the most effective imitation of the ocean's volume and mass since "La Mer." It opens with, and returns to, dense, expressionless string chords played non vibrato. Soon it's flecked with wind tremolos and string trills.

It becomes texturally varied, permitting itself brief bursts of lyricism — a soaring violin melody, later some sustained, floating trumpet. As the piece approaches the end of its 15-minute span, the textures become thinner and loftier. Soon there's a suggestion of a chorale that may be a lament for the loss of habitat as climate change progresses. "King Tide" is well worth being part of symphonic music's 21st-century "relevance," without being tendentious about it.