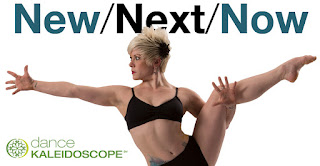 One of the hottest tickets at the IndyFringe Festival for several years has been the annual hourlong show by Dance Kaleidoscope, the city's durable contemporary-dance troupe.

For a couple of years, the program has focused on new works by DK dancers rather than samples from its repertoire. Artistic director David Hochoy displays both graciousness and wise encouragement in turning over to his member colleagues this part of the company's outreach.

The show I saw Thursday evening brimmed with lyricism, exuberance, and simple truths. Titled "New/Next/Now," the production consisted of seven works, all introduced by their creators or designated spokespersons (Hochoy and DK rehearsal director Liberty Harris).

Choreography necessarily bridges abstract and dramatic expression. All the pieces in "New/Next/Now" reflect their creators' idealism and desire to either transcend or resolve conflicts through the language of movement. The collaborative spirit is intense and sustained in this show. The technical demands are often huge, but they are met within a context that privileges communication.

Justin Sears-Watson's whiz-bang finale was untypical of the show but perfectly placed. Using eight dancers in "Speak Easy," Sears-Watson outfits his dancers in insouciant partying clothes and sets them spinning, jumping, twitching, and soaring to the explosive music of the Buddy Rich big band.
A slow, sensuous middle section makes for a satisfying tripartite structure in which joie de vivre can be displayed in full spectrum. Though the piece is an ensemble triumph, its  saucy energy — with facial and physical expression fully integrated — can be summed up in the performance of Jillian Godwin.

Earlier, Godwin introduced her piece, "Flashes of Life," with words about space — both close and far — and her interest in how people relate to it. The work for five dancers involved lots of space on and near the floor. There was a sense of struggle, slow and difficult, as if people have to fight isolation and dispersion in order to form alliances.  There were helping gestures, sometimes tentative, moving toward  recognition that we're all entitled to occupy space, to move into and claim our full stature.

This kind of working through uncertainty was central to Timothy June's "Origin of Love," which bases modern views of identity on the Platonic notion that human beings move toward love to complete their sense of self. Finding a soul mate is an essential life project subject to interruption, distraction, and false choices. Choreographed for three couples, the bonds shift in the course of the work, set to the sublime "Tallis Fantasia" of Ralph Vaughan Williams. Rejection of unsatisfactory alliances is gently handled, because June is focused on the nobility of this universal search for completion and fulfillment. The work remains true to the philosopher's fanciful concept.

A similar idealism pervades other pieces, such as the opener, in which creator Stuart Coleman, replacing an injured Brandon Comer, partnered Mariel Greenlee. This modest, ethereal duet yielded to a trio that incorporated a few energetic disturbances before ending placidly: Noah Trulock's "Silently/Seeking/Solace."

Two edgier works complete the program, whose final performance is Sunday on Theatre on the Square's main stage. Like Coleman, choreographer Zach Young needed to dance his own piece, "Sovereignty," due to Comer's injury. With Godwin in a role unusually requiring toe shoes, Young and June moved from sparring to redirecting their attention to the feisty, fiery-red-clad woman. The piece was physically daunting, yet smoothly balanced cooperation with a persistent three-way drive to come out on top.

The reconciliation was fully achieved, however, putting "State of Grace" in line with "New/Next/Now"'s pervasive endorsement of happiness. There's nothing shallow about happiness; it's not a smiley-face emoticon or decal. This show beautifully represents that fact seven ways.