Among the most valuable recent releases from Cedille Reords is a magnificent disc of Antonio Vivaldi's six concertos for viola d'amore, with Rachel Barton Pine as soloist with Ars Antigua.

For the most part, the accompaniments are for string orchestra with harpsichord (David Schrader), but a particularly fascinating piece is the Concerto in F major, RV 97, with the resonant string instrument partnered with horns and oboes, plus (in the slow second movement), a bassoon.

The viola d'amore, which gave way to the viola we know today, enjoyed a vogue in the Baroque era because its equal number of bowed and resonating strings (totaling 12)  gave it a warm aura as a solo instrument that could hold its own in the ensembles of the day.  And this is how Pine plays it, fully engaged with the Chicago-based period-instrument ensemble.

Vivaldi achieved a great deal of variety in his settings for the instrument. Sometimes a stately theme 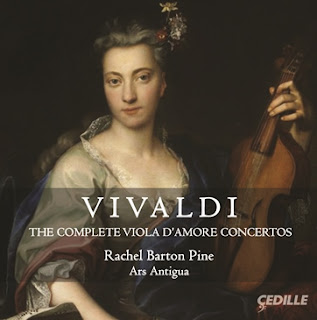 To close out the set, there is the late concerto, again in D minor (RV 540) that brings in the lute as a secondary solo instrument. Hopkinson Smith is Pine's partner for it, which is notable for a refreshing exchange of phrases between lute and viola d'amore in the finale.

Here's my review of her performance of some of these works with the Indianapolis Baroque Orchestra: