We know so little about Shakespeare's life that every doubtful bit of gossip has its allure. One of them concerns his death at 52, shortly after the playwright retired to his native Stratford. It's said he got together with a couple of fellow literary stars — Michael Drayton and Ben Jonson — for a night of drinking that took on binge proportions. It proved mortal for the most securely immortal of the illustrious trio.

In that spirit, EclecticPond Theatre Company is offering IndyFringe Festival patrons a bibulous take on the early romantic tragedy "Romeo and Juliet." It seems like a good choice, though I hope "Drankspeare" won't become one in a series. True, it might explain a lot if King Lear came on drunk in the first scene of his play.


With much of its text intact, the earlier tragedy proceeds from street fighting that could be taken as a consequence of drinking deep on to the fatal misinterpretation of potions by the play's star-crossed lovers. And it's not far-fetched to interpret Mercutio and Tybalt as two different kinds of drunk — the long-winded jester and the roaring boy, respectively. Salut!

EclecticPond has mustered a host of its loudest zanies to turn the small stage of ComedySportz into a den of soused roisterers. They are Frankie Bolda, Chelsea Gill, Michelle Greenwell, Pat Mullen, Paige Scott, Evan Wallace and Matthew Walls. All enter and exit holding beer cans, swigging regularly from them. They punctuate Shakespeare's rhymed couplets with commands of "Drink!" — not that anybody needs the encouragement of a drinking game. The effect goes straight to their heads, bypassing the stomach; granted, I might have missed some belches.

Due to the preponderance of women in the cast, there's lots of looseness about gender. It's more travesty than tragedy. The robustly declaimed Shakespearean text — none of the actors is of the sleepy, mumbling type of inebriate — suffers many modern insults. Some of these are just there to display the perils of DWI (Dramatizing While Intoxicated); others have an apropos sparkle to them.

So it's a bright touch of anachronism when at the start of the balcony scene, the "Drankspeare" Romeo says the line "She speaks, yet she says nothing; what of that?" in response to Juliet's fiddling with her iPhone above, muttering, "What's the WiFi password here?"

It would be fatuous to guess whether Shakespeare would have enjoyed this. When it's a matter of dispute whether he was Catholic or Protestant, it's beyond silly to be certain of his taste for outrageous parody. Yet there's a profusion of slapstick in the canon. Besides, the bloody-minded early tragedy "Titus Andronicus" ("R&J"'s immediate predecessor in that genre) has been credibly interpreted as parody.

Like the social-media intrusions in "Drankspeare," Shakespeare occasionally makes fun of contemporary tastes and fashions: In "Romeo and Juliet," Mercutio greets the wandering lover with "bon jour," then adds: "There's a French salutation to your French slop," alluding to Romeo's baggy breeches. Cultural chauvinism, a staple of the history plays, is the subject of jibes and indifference elsewhere among the dramas. Hamlet disdains his uncle's carousals with the comment: "Tis a custom more honored in the breach than the observance."

Accordingly, Shakespearean custom may occasionally be honored most when it is not strictly observed. Into the breach staggers "Drankspeare," sozzled and disheveled, topped by a surprise happy ending that teases final-scene alliances in the comedies. Indulge — you won't hate yourself in the morning.


Probing and interpreting one's past is a lifelong project for just about anyone unwilling to undertake the thankless labor of disowning it. Most of us are better off facing up to it, even the cringe-worthy bits. Loren Niemi and James Solomon Benn shoulder the task head-on, in vastly different ways, in their Fringe shows.

Niemi carries impressive professional laurels and academic credentials into his storytelling craft. The title of his Phoenix Underground show, "Bad Brother: Religion and Politics in '69," provides an immediate focus. The "brother" part has nothing to do with siblings, but Niemi's membership in the Christian Brothers, a worldwide Catholic religious community, and his eventual dismissal from the order.

The clarity and suspense of his personal narrative, hitting upon some of the most vexed social and political issues of America in the Sixties, rivets the attention. Niemi is a master of the well-judged pause. He plays judiciously with different time levels and significant persons in this autobiographical account of a young man's spiritual and political involvement, its fulcrum being the trial of "the Milwaukee 14" in 1969, the result of some of the Brothers' destruction of draft-board files.

At the very end, he suggests parallels between activism in the 1960s and early '70s and a couple of today's raging issues. But he's never heavy-handed about it. Like all good storytellers, he exhibits narrative craft at a high level and leaves it to the listener to apply the lessons. Not only those who are roughly Niemi's contemporaries, as I am, will be fascinated by "Bad Brother."

In "Little Butchie Sings! A Cockamamie Colored Cabaret" in the IndyFringe Basile Theater, Benn combines song and anecdote with a bit of dancing to tell the story of his self-discovery and adjustment to life growing up in Indianapolis with three counts against him: being black, fat, and gay (in his concise description). 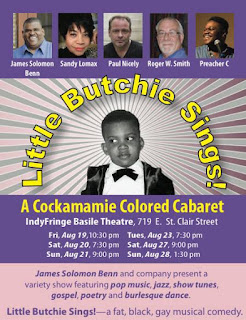 He heads a cast consisting of Sandy Lomax and Paul Nicely, who contribute to the vocals – the most hilarious of which is a spiritual-influenced harmonization of "All God's Chillun."  And what they all got here is issues, not shoes or wings. Benn knows he's not alone.

Backing up the singers is a keyboardist with flair, Roger W. Smith, whose musical direction contributes polish and coordination to the performance. Musicals the show's creator loves — "Eubie," "Purlie," "Chicago," "South Pacific" among them — are spotlighted in the song selection, tied in to sketches and narration.

Benn is ingratiating and thorough in making his youthful psychic wounds explicit, re-creating them in an entertaining and finally uplifting way with the help of Smith and the cast. A spoken-word preface by Cornelius "Preacher C" Shaw puts the playwright-star's struggles into a wider context and echoes forceful pulpit messages that usually proclaim values other than the ones this hero supports and lives every day.

Well-known as a professional actor around Indianapolis, Benn in this revealing cabaret show wins the audience over with boisterous humor and the underlying tenderness of his storytelling and personal testimony.