"Row After Row": The 51st state of professionally led readings in the Indy Actors' Playground series 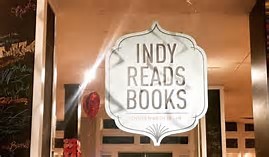 Indy Actors' Playground, a project shepherded by Lou Harry in partnership with, at first, Bill Simmons, now with Paul Hansen,
brought forward Rob Johansen's choice of "Row After Row," by Jessica Dickey. About once a year, I seem to quell anxiety about reviewing a presentation clearly marketed as recreation for the local acting community. That seems right, I guess, though I've enjoyed a few other readings I decided not to blog about. My previous Indy Actors' Playground posts, one from 2015, one from 2016, can be accessed here and also here.

Johansen has a knack for finding the grotesque charm in obsessed characters, and so he does as the intensely committed, detail-obsessed Civil War re-enactor Cal in "Row After Row." With the able assistance of Jen Johansen and Mike Floyd, who have similar time-traveling, character-shifting requirements, the three actors fold into the performance intermittent portraits of people caught up in the bloody, consequential events at Gettysburg in early July 1863.

Dickey mines a lot of the comic disconnect between nerds and the real world in the early scenes of this one-act. Cal needs lessons in perspective and civility from his uneasy pal Tom in treating Leah, whose initial offense is having taken a seat at their favorite table before the men arrive at a Gettysburg bar for post-reenactment refreshment. The dialogue bristles with tension that entangles sexism and authenticity. Leah holds her own from the start, and eventually Tom has one of those "bursting" moments of a quiet character that make drama so exciting.

When Civil War actuality washes over these characters. they embody people that resonate somehow with their 21st-century selves. Dickey manages this quite well. The wartime dialogue, while fiercely reflective of war's epic distractions from normality, attains a lyricism reminiscent of the Civil War poetry and prose of Walt Whitman. Particularly vivid is Cal's transformation into General Longstreet, the Confederate leader caught up in one of Robert E. Lee's colossal mistakes that's become known as Pickett's Charge.

"Authenticity ain't cheap" is a line in the play that comes to mean not only the outsize financial costs of this hobby but also  the psychological price of toggling between two worlds — worlds of jarring contrast that happen to occupy the same turf more than a century-and-a-half apart.

A recent study I heard about (on NPR, naturally) contrasted the wartime memories of veterans afflicted with PTSD and those who saw combat but remained free of that illness. Over time, the latter group put their memories in the context of bonding around a common effort, with a glow of heroism. Each time their reminiscences were recorded, they changed in this rosy direction. The accounts of PTSD sufferers, however, always remained the same, in harrowing detail. It's also been established that all memories of people roughly within the mentally healthy spectrum are unconsciously revised with each retelling. It's no figure of speech to say we are truly authors of our own lives, even as we believe we're being honest about them.

Dickey's Civil War re-enactors exemplify this habit within the conventions of the exacting discipline of historical re-enactment. Through the participants' expensive hobby, the exhilaration and terror of warfare resonate with their personal fears, hang-ups and the tenuous promise of joy and fulfillment. Grounded in this reality and neatly balanced between comedy and pathos, "Row After Row" deserves to be staged here.