As different as their methods were, three shows I saw Wednesday night at the District Theatre exemplified a major Indy Fringe Fest value: storytelling. 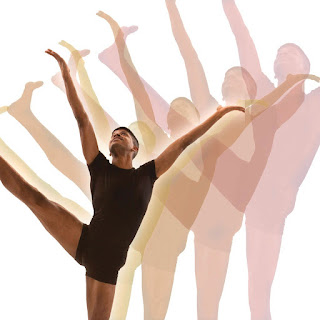 Narrative was even uppermost in the most abstract presentation of the evening: "Our America," a collection of new pieces by members of Dance Kaleidoscope. Seven DK dancers each set a piece upon their colleagues — ranging from three to 14 of them, with a broad range of musical accompaniment.

Artistic director David Hochoy introduced the program by recounting his charge to the choreographers to present their visions of the USA. The representation of the theme of a personalized America used the nonverbal language of contemporary dance to celebrate the country's potential as well as its actuality. Yet each choreographer's spoken introduction to his or her piece outlined aspects of storytelling to their choreographic perspectives.

All seven pieces were worth seeing, in terms of the quality of the dancing, which sometimes outdid the freshness of the choreography. Rather than offering an implied or explicit ranking of the work of Mariel Greenlee, Aaron Steinberg, Jillian Godwin, Paige Robinson, Missy Thompson, Manuel Valdes, and Stuart Coleman, it may be more useful to highlight three works that particularly struck me for the way they wrestled with mixed feelings about American life.

The complexity of Godwin's "A Home for All" was impressive. She mastered the elusive chore of representing multiplicity in the American experience. The well-woven patterns, with nearly unstinting strife threaded amid notes of triumph, were busy but presented in an uncongested manner, making good use of the emotionally featureless music of Philip Glass as a one-color canvas on which to paint.

Thompson's "The Jones Effect" takes its title from the hoary phrase "keeping up with the Joneses," indicating the American desire to conform to the expectation that everyone will be motivated by upward mobility. "Be not the first by whom the new is tried, not yet the last to lay the old aside," Alexander Pope wrote long ago. Thompson used imitation and departure from imitation as polarities of our anxiety about how much to assert ourselves. Should we strike out in new directions that are not already endorsed by the people we're trying to emulate? "The Jones Effect" presented the quandary well.

Although other dances used contrast deliberately, to me the most arresting creativity on that score came with Valdes' "In the Midst of a Storm." Choosing to focus on the confining and liberating roles of women today, he first presented his six female dancers as nearly robotic, costumed in drab overalls and moving with affectless, angular jerks. His way of representing such assigned behavior seemed freshly conceived; when the women cast off their outerwear, they retook the stage as free agents, individualized yet joyfully reinforcing one another's freedom. This was a case where an obvious scenario and its meaning was executed in an unhackneyed way.

Mark Twain was first and foremost a storyteller, an American original in style and subject matter. That classic position of Samuel Clemens in the literary pantheon got good use from Zach&Zack, the team responsible for a few of the city's greatest original hits in and out of the Fringe Festival.  "Yas, Twain" is a madcap romp through the author's life and works. The cast of six has relentless fun with Zack Neiditch's script, loaded with asides and interruptions, the most outsize of which is one participant's insistence that the show should be about Shania Twain.

Producer Zach Rosing's projections, both film clips and still photos often framed with a delightfully antique look, give enough context for some of Mark Twain's inimitable humor and descriptions to shine through. The show has a stunningly dismissive way of dealing with the master's novels, which are problematic either from today's racial perspective or easy to patronize as childish fables.  The one long work of fiction taken seriously, as the show goes through a dark episode, is "The Mysterious Stranger."

Some of Twain's most vivid humor, readily adaptable for stage production, comes from "Roughing It" and "The Innocents Abroad." The show wisely draws on this material, quoting it directly. Its freewheeling high spirits may seem tame today, but a clear line can be drawn from the pioneering aspects of Twain's writing to fit the coordinated multimedia rowdiness of Zach&Zack productions. The shapeshifting cast of Matthew Altman, Christian Condra, Shawnte Gaston, Tiffany Giliam, Mary Margaret Montgomery, and Evan Wallace — often displaying the iconic white-haired, bushy-mustached Twain of his later years — was more than adequate for the realization.

My evening started with Michael Swinford's performance of a suite of one-character playlets on gay themes by Dan Bulter called "The Only Thing Worse You Could Have Told Me." Swinford, artistic director of the fledgling Be Out Loud Theatre, performs the five mini-dramas with stunning virtuosity.

The series mounted in intensity and nuance to the high plateau of the fourth and fifth vignettes. Swinford's eyes were expressive keys to his embodiment of two gay men of contrasting personalities.  In the next-to-last one, he is an intellectual, pausing deliberately to offer jaundiced views on contemporary gay life, before passing into a personal account of his coming out and its persistent trials on his soul. The shadow of self-hatred never entirely goes away, but its roots are starkly shown and our sympathies are engaged.

In the last sketch, Leslie, a more clearly "out" man, vain and somewhat self-conscious about his role as a volunteer deliverer of food to people with AIDS, undergoes a conversion of sorts. He's proud of his separateness from the often sordid condition of the dying men he serves, yet finds one of them transformational. He's surprised to experience pure love developing in his relationship to the lonely patient. Swinford carries the portrayal through movingly to Leslie's enduring devotion to a man he never expected to love.

Storytelling inevitably exerts a primal power on us when it is so well done as it is in these three shows.