Allee, whose son David established the Northside club 22 years ago and runs it with a keen business sense, was at the keyboard presiding and acting as master of ceremonies. Joining the pianist were tenor saxophonist Rob Dixon, drummer Kenny Phelps, and brothers Nick (bass) and Joel (guitar) Tucker. With their careers at different points of longevity, all are well-known here, with a history of taking care of business on the bandstand. Allee is a past master of this kind of professionalism, and continues to wag a warning finger at Father Time. 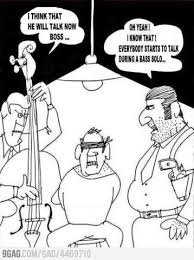 I learned from Joel Tucker that the smoothly working quintet had no rehearsal, depending instead on the rapport they've shown with one another in various combinations over the years. This meant the chugging introduction in the minor mode that introduced "Winter Wonderland" was the product of Allee's spontaneous mind, not collective wood-shedding. It rolled out beautifully as the tune took over, with blue tinges in the snow, thanks especially to the guitarist's solo.

From the non-seasonal standard repertoire, Allee called "You and the Night and the Music." Rob Dixon contributed the initial solo — so well placed and paced, so typically comfortable at the fast tempo. And there was such feeling poured into the bassist's solo that I felt he had a particular "you" in mind, and the night and the music would take care of themselves.

Speaking of Nick Tucker, it was a pleasure to notice the crowd's quiet during his solos, a continuation of its appreciative behavior throughout the set. Neither in his ballad "Bye Lula," nor in Joel's "Shakshuka," was there more than a rustle of conversation when he occupied the spotlight. It was a great refutation of the cliche that everyone talks during bass solos, memorialized in the above cartoon.  Duke Ellington is said to have referred to bass solos as "the commercial." But they are well worth listening to when they have this adeptness.  "Shaksuka" (the title, my son William informed me, refers to a Middle Eastern stew that is served sizzling in a skillet) ended with exciting exchanges between Allee and Phelps, who was in an extra-exuberant mood behind the kit.

The set was bookended with hits from the Fifties — Horace Silver's hard-bop classic "The Jody Grind" and the evergreen set-closer called "The Theme," taken at a medium-bounce tempo.