When Gary Varvel's regular cartoon feature in The Indianapolis Star depicted his response to President Obama's executive order on immigration, I was farther away in this hemisphere than I've ever been: Argentina.

It was a good place to confirm my perspective on the historic establishment and movement of cultures in North and South America. The takeaway message for this monolingual WASP: Rule, Hispania! Western Hemisphere history is overwhelmingly the result of conquest directed from the Iberian peninsula long before the first permanent settlements by the Northern Europeans whose descendants are about to begin their Thanksgiving feast in Varvel's cartoon. The midsized inland city — San Juan — where my wife and I were visiting our son was founded in 1562 — four-and-a-half decades before Jamestown, more than a half-century before Plymouth Rock.

Though Argentina in particular isn't adding to the pressure to reform immigration law and policy in the United States, many people born between there and here who share its language and aspects of its culture are now part of our society. Congressional inaction on how to give some de jure status to the de facto participation in American life by these millions forced Obama's hand. I fully support what he is doing to bring order and rationality to deeply rooted realities.

So I disagree with Varvel — as I have so often — on the political point he seems to be making. But I do not share the view of many of his critics that this cartoon is racist. I think labeling it or its creator with the r-word shuts down discussion and, more crucially, misunderstands the nature of Varvel's art. 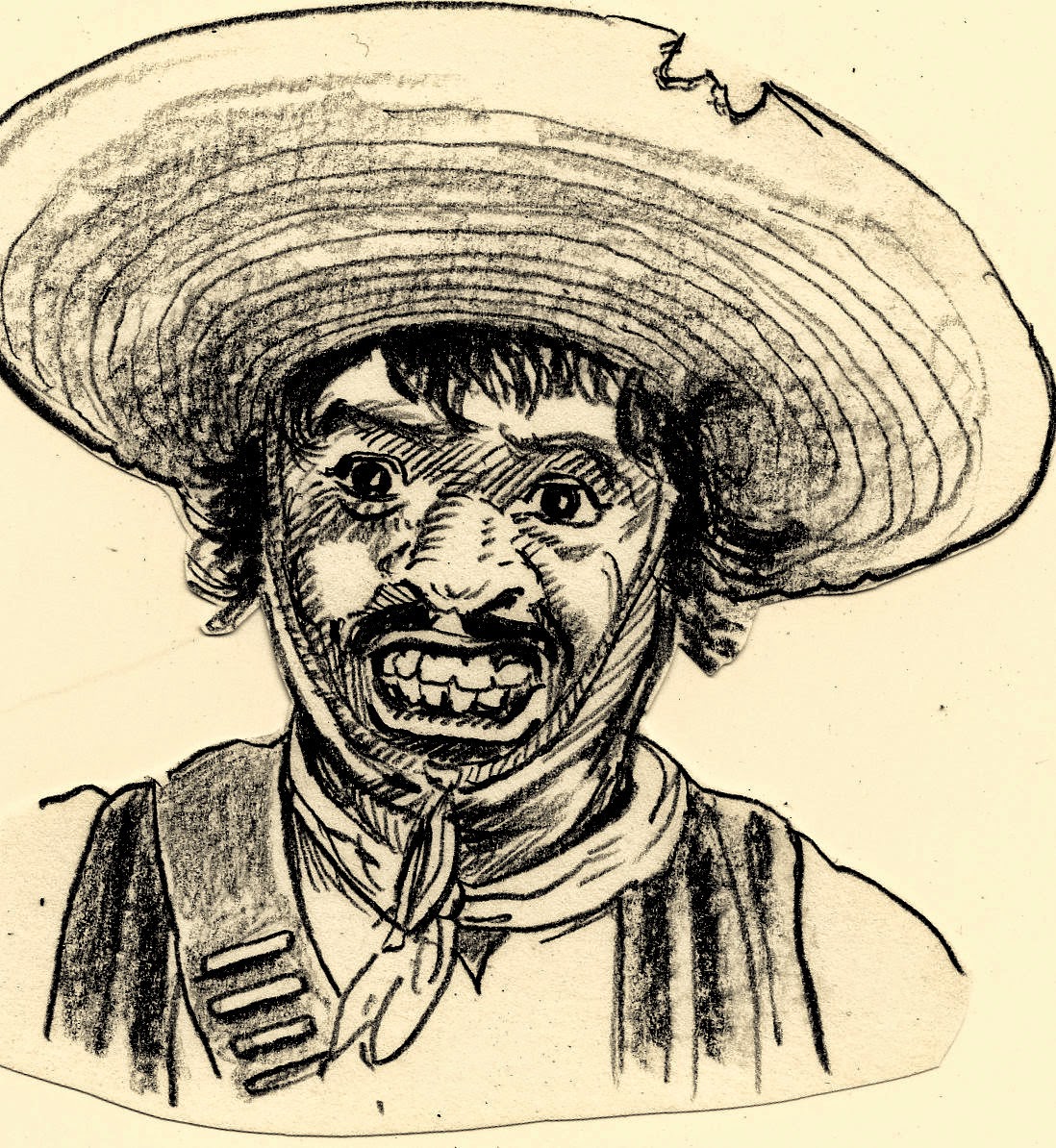 First of all, stereotypes are vital to the way editorial cartoons convey their meaning. Varvel has been hammered for his depiction of the man leading his children (apparently) through the dining-room window. Clearly, the family is meant to be seen as Mexican or Central American. If the baseball cap and the Pancho Villa mustache clearly signal this identity, it is a fairly gentle representation, certainly not as much of a demeaning caricature as, say, that notorious cartoon commercial shill, Frito Bandito.

The word "stereotype" has acquired a bad reputation, but the problem with stereotyping is not that it is entirely false or necessarily vicious; rather, it is a narrowing of perspective isolating certain perceptions about a group of people. It keeps us from appreciating the variety within the group being identified. Even so, it is vital to the way editorial cartoonists make their points within the single-panel confines of their genre. Favorable and unfavorable stereotypes may exist side by side; they used to be quite blatant, and figures were often slapped with labels to underline the identification, as in the 1940 cartoon (below right). The Nazi soldier is a huge, slumping monster; the Scandinavian maiden, virginal and natively costumed. The rape subtext is clear. Stereotypes are essential in conveying the message — dehumanizing the enemy, making his prey seem to cry out for our protection. 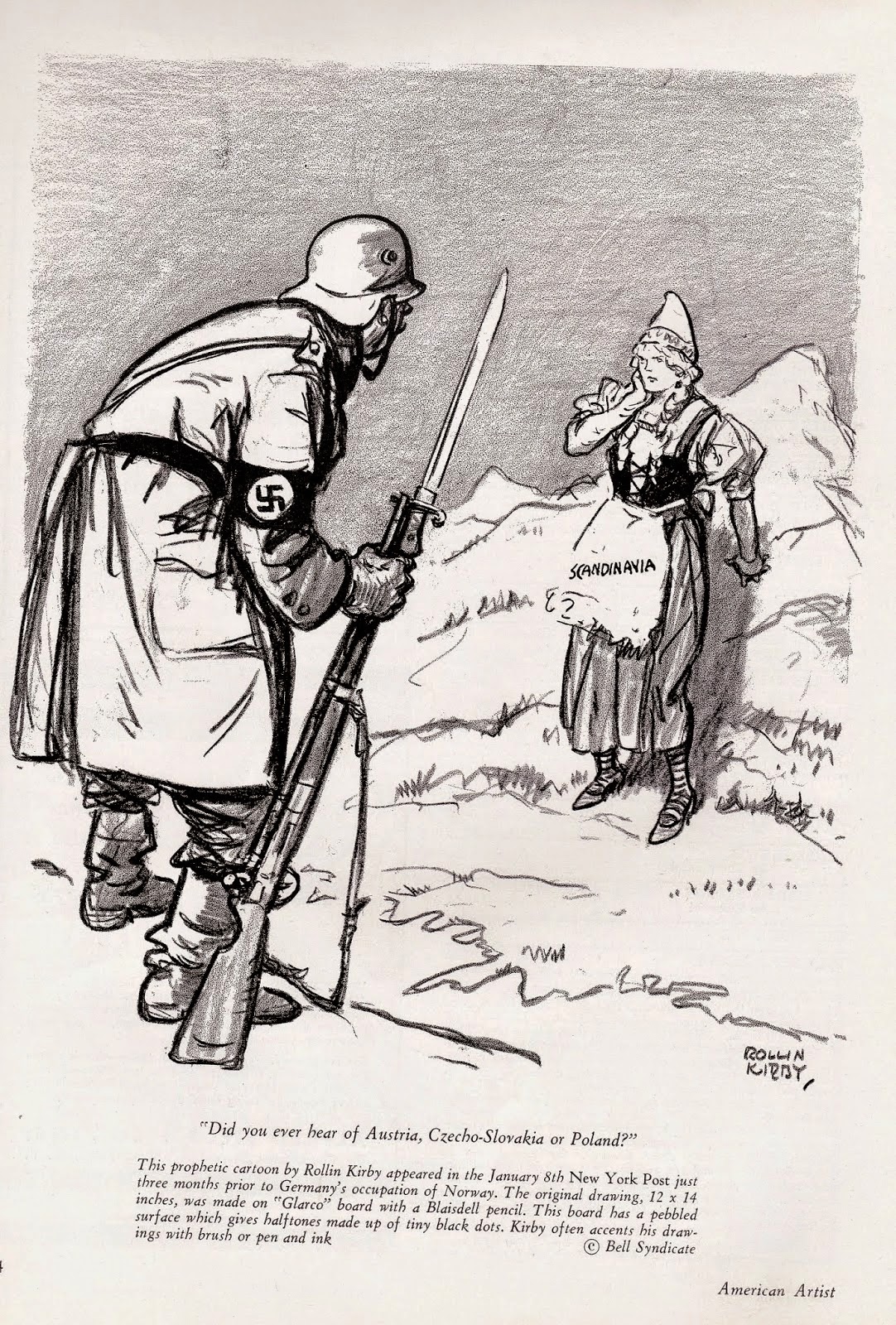 Varvel is quite clever at creating his own stereotypes or iconic signifiers of the politicians and activists he draws so well.  In Varvel's world, secular ACLU lawyers tend to offset their balding pates with short ponytails; they look ridiculous — that's the point. The cartoonist's visual mockery ranges from  exaggeration to winking fancifulness: Obama's ears are nearly as big as Dumbo's. Bill Clinton was always hilariously depicted in boxer shorts decorated with red hearts.  B. Patrick Bauer, the Indiana General Assembly's former Speaker of the House, dependably wore an askew toupee with the price tag attached. This is in the tradition of Herblock's decades-long depiction of Richard Nixon with five o'clock shadow; the cartoonist ceremoniously gave the controversial politician a clean shave after Nixon became president. (In retrospect, the stubble should have stayed.)

For several hours before the Star took down Varvel's cartoon, the undocumented immigrant dad had his mustache erased in a vain attempt to quell the outrage. The cartoonist was thus deprived of an essential element in conveying his message. The immigrants who are mostly the focus of dispute over immigration policy do come from the Hispanic countries south of the U.S. border. That identification was essential in order for Varvel to raise his objections to Obama's action. The Thanksgiving feast host's words in the cartoon bubble also make clear that Varvel's quarrel is with what Obama did. There is nothing in Varvel's art to suggest he is against Latin Americans.

The family's entrance through an open window instead of the front door emphasizes what Varvel sees as some immigrants' illegal intrusion into American society. Such imagery has to be part of the shorthand necessary to editorial cartooning. The unexpected guests couldn't be depicted showing up at the front door, as someone suggested in one of the many online comments it has been my depressing duty to read in studying this brouhaha. A front-door entry would convey legitimacy, which Varvel and those who think like him are at pains to withhold from undocumented immigrants.

The Varvel cartoon controversy seems to indicate a sad, narrowing trend of permissible discourse in America. Cries of "offensive" and "inappropriate" — and particularly the loose application of the "racist" label — tend to rule out of bounds creative expression that ought to be seen in a larger context. That context was glossed over in the public apology offered by Varvel's boss, Jeff Taylor.

On  this blog, I am a relentless defender of the arts.  I see Varvel's Nov. 21 cartoon as the latest example of his skillful expression of political viewpoints that are almost invariably opposed to mine. But this piquant drawing, like most of his work, falls well within the conventions —  including technical aplomb, symbiosis of word and image, communicative power, and conciseness — of the art form to which he has long contributed with distinction.