My soundtrack in the aftermath of Obergefell v. Hodges: two recordings of Elliott Carter's Double Concerto

Elsewhere I have expressed my dismay that the Supreme Court last Friday leaped into settling a question that ought to have been resolved among the voters and their elected representatives. Despite that, the Obergefell v. Hodges decision holds out the promise of a society I will be happier to live in.

In contemplating the future, in which committed same-sex relationships (one of them close to me, and of 35 years' standing) will have legal sanction, a fascinating sidebar in the New York Times' coverage was a feature on how gay culture will have to change, perhaps in ways that are poignant and a little alarming to those within it.

It's not my place to assess the potential for stress on the social bonds within the gay community, once same-sex marriage goes mainstream. But the situation reminds me, looking on as a sympathetic outsider, of similar stresses that threatened social cohesion among African-Americans with the decline of segregation (still in many ways a de facto reality).

It might not resonate with most people interested in the fallout from Obergefell that I have found a musical analogue to the post-Obergefell interaction of gay and straight culture: Elliott Carter's Double Concerto for Harpsichord and Piano with Two Chamber Orchestras. But I will forge ahead anyway, realizing that my interpretation is a peculiar overlay on a 1961 composition with no implicit or explicit connection to homosexuality and its struggle for respect from the heterocentric mainstream. 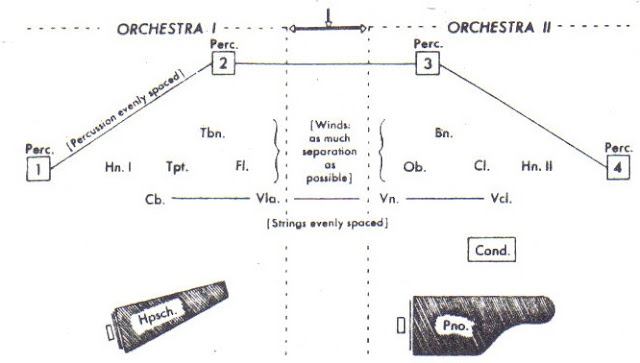 Carter's procedure in this work is to assemble a "world" around the polarity of two solo instruments — harpsichord and piano — each of which is accompanied by a small band that flavors, develops and extends the material peculiar to each soloist. It is significant that the two solo instruments are by nature the most vividly contrasted; the constituents of the ensemble each one leads have relatives on the other side [see chart above]. Symbolically, I see this as indicating the manifold parallels and similarities both communities share, helping to reconcile the core dissimilarity of sexual orientation.

There are flashes of incompatibility that become quite intense, but also absorbing interactions and sensitive responses that, in our post-Obergefell environment, I choose to think of as a harbinger of long-lasting harmony between the two cultures. In many parts of American society, of course, especially the arts, this harmony has largely been achieved. Marriage equality, now the law of the land, represents the huge advance to come on the rapport already evident to many Americans.

Carter (1908-2012), in the long major phase of his output, conceived his works as scenarios for musicians displaying in abstract terms the jostling for identity and mastery characteristic of human society. He didn't sentimentalize such conflict or get theatrical about it. The Double Concerto places the ensembles carefully, so that the two groupings are plainly evident.

But this serves the purpose of making the musical separation and its occasional abrasiveness clear. There are no costumes or props, no histrionic gestures. These aren't ignorant armies that clash by night (to borrow Matthew Arnold's phrase in another context), but knowledgeable teams that follow through creatively on the implications of the resources they have been given.

I have two recordings of the work, one (on Columbia) played by the English Chamber Orchestra under the direction of Frederik Prausnitz; Paul Jacobs (harpsichord) and Charles Rosen (piano) are the soloists. A later one (Nonesuch has the Contemporary Chamber Ensemble, conducted by Arthur Weisberg, with Jacobs back as harpsichordist and Gilbert Kalish at the piano.

If I had to characterize them in a thumbnail manner, I'd say the English performance is a more Apollonian interpretation, the American one more Dionysian. Tensions are poised in the Columbia recording; the central Adagio is a beautiful plateau on which each side assesses the opposite camp and negotiates a way forward. The American performance is better recorded, which perhaps gives it the edge in vividness and suggests a Romantic afflatus behind Carter's severe-sounding modernism.

Carter's stated inspiration, typical of him in the breadth of his cultural interests, is extensively described in his program note to the Columbia recording, but minimized in what he wrote for the Nonesuch jacket.  The generative literary works for the Double Concerto are the Latin poet Lucretius' "Of the Nature of Things" and Alexander Pope's "Dunciad."

The former work is speculative physics in verse, setting forth an atomic theory of matter that Carter found attractive in generating his piece from the onrush of percussion with which it opens. "The Dunciad," on the other hand, comes from a more complex society, at home with irony and more technically advanced, in which the social world is constructed from the "atoms" of individual behavior, in this case viewed satirically. Carter uses this as his cue to eventually disassemble the sound-world the two solo instruments and their colleagues have created, "unmaking" the foregoing procedure and fading rather quickly into nothingness. Pope's "Dunciad" ends similarly, though with a unique blend of grandeur and mockery.

Now, how can my optimistic view of the gay-straight rapprochement possibly be apt for such a scenario, which seems to result in a sophisticated shoulder-shrug?  In this way: The process that Carter has set down in detail can be interpreted as a social phenomenon no less essential for being transitory. Ever averse to traditional musical rhetoric, Carter blithely skips out of his intricate scenario at the end — not tragically, cynically or resignedly, but pretty much with the attitude: Wasn't that fun while it lasted?

That's the kind of fun we will pass through in America as we get used to each other in new ways. We will come out on the other side with something it would be naive to be grandiose about. It will simply be life — more broadly conceived, more graciously lived, with a more inclusive sense of ordinariness. New materials will be assembled to provide ever-new syntheses.

The adventure that awaits is adumbrated brilliantly in this permanent work of art. We may all be post-modernists now, but — in Carter's Double Concerto — it remains clear that High Modernism lives!