Songwriters as different as Cole Porter and Irving Berlin loved Ethel Merman. It's significant that among the giants of the Great American Songbook, these two contrasting creative figures wrote both words and music. Merman was powerfully faithful to each, leaving nuance to others.

She nailed tunes and text alike to the back wall (perhaps even to the theater across the street, as Jo Stafford once observed) in a host of starring roles from "Girl Crazy" to "Gypsy" in the middle decades of the past century. "The Book of Merman" revives the Broadway diva in a set-up borrowed from the recent hit musical, "The Book of Mormon."

Is she a fantasized Ethel, an Ethel viewed through a Mormonized version of Alice's looking-glass world, or perhaps just an impenetrable Merman "tribute artist"?

Culture shock encountered by a couple of well-scrubbed Mormon missionaries is the premise here as in the hit musical, whose "South Park" edginess goes a few steps beyond "The Book of Merman." Elder Braithwaite (Lincoln Slentz) and Elder Shumway (Tyler Ostrander) make their entrances from the back hall, displaying their persistence in the face of slammed doors and other difficulties before they ring a doorbell with "E.M. Welcome" inscribed on the plate. Braithwaite naively interprets that to mean "Every Mormon Welcome."

On opening night Thursday, Slentz and Ostrander made their characters so lovable, despite their adherence to a religion many of us find bizarre, that it was no stretch to imagine them charming the retired (but never shy) Ethel Merman, who persists too long in taking the missionaries for magazine salesmen. She's focused on getting to the Bureau of Motor Vehicles so she can drive legally again, a mundane task that a missed bus delays, allowing her to become acquainted with the peripatetic lads in their white shirts and narrow black ties.

Jolene Mentink Moffatt had the pizazz needed to convey the diva's warmheartedness and enduring self-regard. Her singing voice couldn't be said to approach Merman's, but whose can? What is wanted here is not mimicry, but credible, full-bodied impersonation, complete with aura, of a Broadway icon. And that's what Moffatt and the production, directed by Emily Ristine, give us.

Elder Shumway drives the missionaries' involvement with Merman, as he is an established fan who carries her autobiography around with him in his backpack. Elder Braithwaite hasn't heard of her, and comes through in Slentz's performance as single-minded about the mission and annoyed by his companion's distracting infatuation.

His petulance as it bursts out unsurprisingly masks romantic jealousy, something Slentz can't be blamed for signaling too early, as Schwartz wants to make that clear. In the same way, the message Merman conveys in Scene 2 of this compact piece is that self-assurance — a committed embrace of who you really are — is the key to happiness. Schwartz has more signals than a third-base coach.

From a keyboard aloft at one side of the stage, music director Jay Schwandt played zestful accompaniments to the singing. The songs are beguiling; the matter of rights to perform a few Merman hits is skirted by Schwartz's concoction of shirttail cousins to "You're the Top," "Anything You Can Do," and "Everything's Coming Up Roses." All are quite clever, as is a derivative rap, ingeniously staged with choreography by Mariel Greenlee, thought up by Shumway as a vehicle for a Merman comeback — something to redeem the embarrassment of her 1979 disco album.

The double-entendre of the missionaries' first song in Scene 2, "If It's Not Hard, I Don't Like It," was likewise underscored by vivid staging. The men's songs were handled well Thursday, though Scene 1's "My Heart's Someplace Else" didn't seem quite ready. 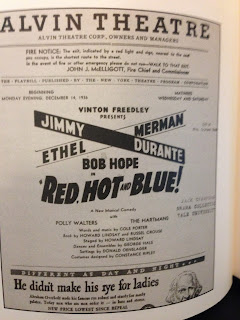 I'm pleased that Moffatt's last solo turn played up the star's egocentricity. "Everything's Coming Up Merman" can also be processed as a command to be the star of your own life. But it helped cut the sugar content of the piece by evoking the real Ethel Merman, who saw herself as deserving undisputed stardom. Her mania for the limelight is captured by the story behind this photo I've borrowed from the book accompanying "You're The Top: Cole Porter in the 1930s" (Indiana Historical Society).

Eighty years ago, she tussled with Jimmy Durante (through their representatives) over top billing for a show called "Red, Hot and Blue!" Porter himself is credited with the mutually acceptable compromise, presenting the stars' names in an "X" above the title, so both appear "on top." Merman would always insist on "Ridin' High!" (her hit song in the show).

"The Book of Merman" preaches that gospel with inviting charm. The ethical, if not the Ethel, trick is to ride high without insisting that everybody else cling to the undercarriage while the one on top enjoys the ride. The new Phoenix show endearingly makes the point.