Common and uncommon coin: Hundred-dollar gold piece moves American imagery forward, past (or not) a good poem with an awful title 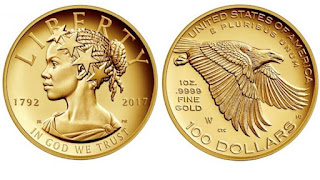 Striking news came from the U.S. Mint over a news-chocked holiday weekend: The first image of an African-American woman will appear on an American coin —a one-hundred-dollar gold commemorative in honor of the Mint's 225th anniversary.

It's a beautiful image, to be prized as much for its rarity as regretted, probably, for the unlikelihood that many Americans will ever see or feel one. And as the acting director of the Mint told NPR this morning (January 17) spending it would be foolish, because the gold used to make it is worth more than the face value of the coin.

Hmmmm: Just as the value of African-Americans' contributions to American life exceeds what white America is willing to credit them with, I suppose. Much is owed, more than is ever likely to be repaid. But to reconceive Lady Liberty as a black woman at least symbolizes movement in that direction.

It brings to mind the previous image of Lady Liberty on the dime — the kind of dime I would still find in my pocket as a kid,
ready to buy a candy bar, until the Roosevelt dimes took over. Early in the 20th century, Elsie Stevens posed for sculptor Adolph Weinman, a neighbor of her and her husband on West 25th Street in New York. His profile of her, in a winged cap, was chosen for the Liberty dime and half-dollar that the Mint put into production in 1916. She was married to the man who wrote these lines:

Excellent lines, the fifth section of an excellent poem in 50 brief sections  by Wallace Stevens. The poem has an unfortunate title: "Like Decorations in a Nigger Cemetery." That alone probably keeps it from being studied in literature classes, though it's a rich example of Stevens' imagination, with echoes throughout his work. The irony of the casual racism behind the title forces itself on my attention as I think about the new Liberty head on the hundred-dollar gold coin.

Stevens' poem was described by the friend to whom he dedicated it as "an olio" — an old-fashioned word indicating a hodgepodge, a miscellany of things gathered. The Roman numerals with which Stevens headed each section warn the reader not to expect continuity between one section and the next. Fair enough, but what about that title? The poet's friend, Judge Arthur Powell, recalled a walk he took with the poet in Key West when they stopped to look through a fence.

"I explained that I thought it enclosed a graveyard," Powell wrote years later, "as some of the rubbish looked 'like decorations in a nigger cemetery.' He was interested when I explained the custom of negroes [sic] to decorate graves with broken pieces of glass, old pots, broken pieces of furniture, dolls heads, and what not."

Poets turn all sorts of things to account, and the title had an aptness in Stevens' mind that overruled any racial sensitivity he may have possessed. There are not indications he had much. Like many normally well-disposed white Americans of his era, he had attitudes somewhat disdainful or dismissive of minorities: Stevens rejected patronizing a certain restaurant with a friend on the grounds that "too many Jews" dined there.

Well-bred Americans tended to express such attitudes only among friends. Similarly, Stevens didn't divulge to many that his wife's portrait was common coin in American pockets. You didn't brag, and you weren't thoughtlessly cruel to people you thought less of. Stevens didn't like poor people, either, but he is reported to have been generous with the occasional handout.

If the judge's observation of black Americans' grave-decorating habits was accurate, his use of the n-word to describe the look of their cemeteries was just another way of stipulating where "the Other" lived and breathed in the country they shared. There were boundaries so strict and self-evident for a Southern judge in the 1920s, and not fully faded today.

The late playwright August Wilson ("Fences") once described the distinctive traits of black culture that justified — nay, required — his artistic specialization in black life. Racial discrimination, for all its sorrows, had resulted in the development of separate cultural spheres in the United States. He felt that his sphere was worth observing, sustaining and celebrating on the stage ("We decorate our homes differently," for instance). Multifaceted cultural identity, he'd say, is certain to persist, whatever barriers to black advancement might eventually fall.

Wilson would have snorted scorn at the platitudes about a "post-racial" America that arose with Barack Obama's election. That toxic word in the Stevens title serves to confirm the painfulest part of what's likely to endure in American life. The most stunning line in "Guess Who's Coming to Dinner," the play now in production at Indiana Repertory Theatre, probes the wound.  The brilliant black doctor's father upbraids him for his choice of a white wife by warning him against the day "when she wakes up and calls you nigger." That got a gasp from the audience the night I attended. It gave voice to a fundamental fear that America may never come to terms with the worst aspects of its racial legacy.

A white man moving into old age, as I am, can't pretend to suggest a way out of the problems posed by the accidental encounter of a poem with an offensive title and a shiny coin proclaiming that an idealized black woman can stand for the United States just as well as an idealized white woman. Yet liberty itself doesn't mean much without that recognition.

I'll just ask you to note that the obverse of the new coin is an American eagle taking wing — not the familiar, literally spread-eagled symbol with arrows in one talon, an olive branch in the other. The eagle is off to someplace new, someplace perhaps envisioned steadily by the black Lady Liberty on the coin's other side.

To adapt Stevens' language in section V, even a bright future must emerge out of the past, "out of what is full of us," our good and evil alike. That's what we can't help carrying in "the search for a tranquil belief." And why would we want to avoid that burden?  After all, "the search / And the future emerging out of us seem to be one."