Dame Evelyn Glennie, a percussionist with a unique story, is guest artist at Butler ArtsFest

The nature of musical performance as focusing on keen hearing is self-evident. The career of Dame Evelyn Glennie is a testament to a larger meaning of music as tactile and spiritual. Given the swift, progressive loss of her hearing as a child (total since age 12), she found a way to distinguish herself as a percussionist, expanding the very idea of hearing, and keeping her artistry before a worldwide public.

Almost 20 years ago, her performance of "Veni Veni Emamanuel" with the Indianapolis Chamber Orchestra acquainted me with the special magnetism of a Glennie performance. The piece is by her Scots countryman James MacMillan.

For her second visit to Indianapolis, Glennie played the composer's transcription of Jennifer Higdon's 2005 Percussion Concerto with the Butler University Wind Ensemble. (Colin Currie played the original version with the Indianapolis Symphony Orchestra, which co-commissioned it, about a dozen years ago.)

The work calls for the soloist to show a range of tone control as it starts with a marimba cadenza. The transition to vibraphone 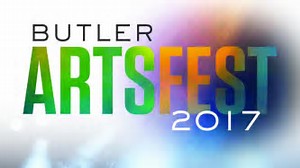 was arresting as the ensemble joined in. Directed by Michael Colburn, the performance spotlighted the charismatic zest typical of Glennie's performances.

Performing barefoot and relying on the senses of sight and touch to fill in the gap left by her auditory deficiency, Glennie is capable of not only keeping her rhythms precise — her dialogue with the percussion section at midpoint was thrilling — but varying as well dynamics and tone color. An outsize cadenza on tuned drums moved the performance of Higdon's concerto to a climax.

Before Dame Evelyn came to the Schrott Center stage, Colburn conducted a performance of Gustav Holst's strolling "Hammersmith: Prelude and Scherzo," op. 52, that proved to be an aptly conservative program companion to the Higdon concerto.

The first half opened with another illustration of the program title "Dialogues, Debates, and Dichotomies" with the stinging, somewhat facetious energy of Ralph Vaughan Williams' Overture to "The Wasps." The Frank M. Hudson transcription was wholly winning and idiomatic as performed by the large contingent of student musicians.

For the concert's other 21st-century representation, the ensemble played Steven Bryant's involving suite inspired by the poetry of W.B. Yeats, "Ecstatic Waters." The piece proceeds from an evocation of primordial nature, keyed to the lower instrumental voices, and proceeds to a tense stage of conflict with technology. There's a lot of musical chatter, eventually yielding to a clarinet solo that brings in a steady pulse under the ensemble, fused to computer sounds. In the long run, flute sonorities cap the piece and the calm of Yeats' "Spiritus Mundi" achieves some sort of synthesis of the contest between nature and technology.

"Dialogues, Debates, and Dichotomies" had more than alliteration to offer in upholding the mission of the annual Butler ArtsFest.