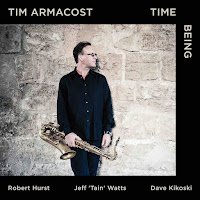 As the saxophonist with the New York Standards Quartet, Tim Armacost is used to approaching the tradition from an angle. And when he is not involved with standards, as is the case on "Time Being" (Whirlwind Recordings), he brings freshness along with compatible colleagues to small-group acoustic jazz, which is nowadays saddled with the label of "straight-ahead" and "post-bop."

Nothing could demonstrate the value of thinking "beyond category," in Duke Ellington's phrase, better than what Armacost achieves on "Time Being" along with bassist Robert Hurst and drummer Jeff "Tain" Watts.  So listeners will readily appreciate that a label which sounds routine ("straight ahead") is inadequate, as is one that suggests the music may be derivative ("post-bop").

Tenorman Armacost and his trio mates, with pianist Dave Kikoski along for the ride on four tracks,  lift up the possibilities of simultaneous improvisation. This phenomenon is rooted in ancient New Orleans jazz, and has popped up occasionally since, with particular emphasis in free jazz and the performances of Ornette Coleman and the Art Ensemble of Chicago, among others. It unites players on a communal level of feeling the reigning vibe without ordering their contributions or establishing hierarchies of solo and accompaniment.

A triggering piece for Armacost to explore this kind of thing with Hurst and Watts was Coleman's "Lonely Woman." On this disc, the performance bursts out with fast-paced drumming over which bass and sax divide the theme while hewing to the plaintive slowness of the original. As the performance proceeds, the melody and effusions derived from it ramp up; Hurst and Armacost join Watts in restlessness. Ensemble unity is nonetheless sustained. You get the feeling, as happens often in "Time Being," of solid players revolving around an imaginary center. But the center is definitely there, a construct of ensemble rapport and devotion to the material. The title tune shows the musicians exercising the way different approaches, capable of flying off in all directions, can find ways eventually to jell that don't seem forced or willful.

Three  interludes, called "sculptures," uphold the idea of unity in diversity. The certainty that comes through in "Tempus Funkit" (Sculpture #2) never seems preordained, except by unspoken mutual understanding. The one that closes the disc, with the jokey title "All the Things You could Become in the Large Hadron Collider," is a close relative to what the New York Standards Quartet is all about. But the trio really takes apart and, in fragments, reassembles the original, Jerome Kern's "All the Things You Are," moving skillfully toward a consonant conclusion.

Harmonically adventurous upon its modal frame, "One and Four" is Coltrane-esque without more than a hint of tribute to the tenor giant's classic quartet. Kikoski has a more delicate style than McCoy Tyner, quite suitable for keeping the reminders from being uppermost. And Hurst packs so much individuality into his solo without cluttering it that you'll momentarily set aside memories of Coltrane's excellent Jimmy Garrison.

My hands-down favorite track is one of the best interpretations I've heard of a Thelonious Monk tune that lifts up that titan's ability to groove you to death whenever he had a mind to. "Teo" is a highly charged rendition, with Hurst and Watts helping to drive Armacost to dizzying heights. Every moment of this performance is a treasure. Hurst gives an up-to-date vividness to the walking-bass manner of soloing. And exchanges with the drummer, so often an exhibition of taking turns, which is nice enough for grade-school playgrounds, enter a whole new territory here. It's as if Armacost and Watts are saying to each other: I'm going to use my turn to set you up for glory, and I know you'll do the same for me. And so they do.

For all the freedom with bar lines and interior rhythms that "Time Being" displays so well, the underlying swing is palpable throughout. In "Teo," it moves to the forefront and stays there. You might want to get up and dance to it, if you're not listening too amazed to move.