Free from its bootleg history, "Wes Montgomery in Paris" comes to proper realization on Resonance Records

In his only appearance in the French capital, Wes Montgomery (1925-1968) found a receptive audience at the Theatre des Champs-Elysees on March 27, 1965, just over three years before his death from a heart attack in his hometown of Indianapolis.

An ORTF recording from that concert is about to be released in its pristine, official version after decades of bootlegged releases, with proceeds going to the Montgomery estate. Resonance Records is behind the official release, produced by Zev Feldman; a two-LP gatefold set was issued at Record Store Day's Black Friday event in November.

Montgomery, here at the height of his powers and close to the big divide in his career between his classic and commercial styles, is at his most relaxed and inventive throughout the two-CD set under review. He heads a quartet thoroughly adept at showcasing him, though a friendly tension gets under way between the guitarist and pianist Harold Mabern.  Mabern's energy is unstinting, and sometimes he's up to Montgomey's level of inspiration, as in "Here's That Rainy Day,"

The rest of the quartet, while not anonymous-sounding, is primarily supportive: bassist Arthur Harper and drummer Jimmy Lovelace. Lovelace worthily commands attention during a series of exchanges with Montgomery and Mabern near the end of "Jingles." (An unexpected resemblance in Mabern's solo here is to Dave Brubeck's penchant for heavy block-chord patterns placed in syncopation against the beat.) 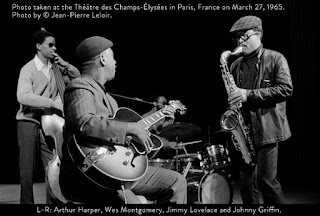 Tenor saxophonist Johnny Griffin joins the quartet for three numbers: "'Round Midnight," "Full House," and "Blue 'n' Boogie." Griffin is at his most heartily florid, particularly in "Full House." Not that what the quartet does on its own needs any lifting, but the formidable young tenorman heightens the buoyant spirit of the set.

A favorite of guitarists ever since he introduced it,  Wes' "Four on Six" opens the program. Montgomery's variety of attack is immediately on display in his solo, with plenty of exposition of his seminal octave technique, then a climax in a parade of rambunctious chords. The indefatigable Mabern rains down phrase after phrase in his solo. The amiable rapport of the quartet is underlined by an easygoing coda.

John Coltrane's "Impressions" draws a concentrated, yet relaxed, display of Montgomery virtuosity. His solo is fiery and inspired, more than simply intense. Stylistically, you can hear some foreshadowing of the "shredding" and jazz-rock fusion guitar that flourished years after his death. And he displays a way of repeating a figure just enough to establish a groove before varying it, so you never suspect he's running out of ideas.

Mabern can't always summon up such variety and freshness: On his own tune "To Wane," his doubling down on a series of hard-charging left-hand chords becomes tedious. The fast romp is keyed to Mabern from the start, but Montgomery is the clear star of this performance. Never the showoff, however, the guitarist remains the composer's attentive partner, sometimes in rhythmic lockstep with the pianist, while varying his tone color so as to keep the excitement fresh.

The overall excellence of this concert is likely to leave the listener with confirmation of Montgomery's genius. He seems to be having a good time, just pouring forth a rich succession of ideas about the music, getting all fancy and dazzling while creating an uncanny illusion of effortlessness. Though he went commercial toward the end of his too-brief career, he was from first to last a natural artist when it comes to welcoming the affection of all kinds of listeners to his music. That appeal is ceaseless throughout the Paris concert.