Getting in deep with Bach's violin-keyboard sonatas: Vinikour and Pine join forces in two-CD set

In J.S. Bach, there is always at least as much as meets the eye (or ear). Everything can be heard, and often its relationship to its surroundings is immediately evident as well. But – it's time to embrace the cliché— there's always more than meets those two relevant sense organs, too. 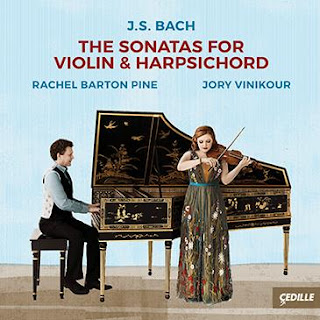 It's all on display in "J.S. Bach: The Sonatas for Violin & Harpsichord" (Cedille Records), which came out last month in double-CD performances by Rachel Barton Pine, violin, and Jory Vinikour, harpsichord. (The duo was among the guest artists two years ago at the Indianapolis Early Music Festival, so my local readers are aware what they are capable of.)

My standard of comparison couldn't be more different from the new version, which adheres to 18th-century performance practice and the sound that presumably would have been familiar to the composer. The comparison is a 42-year-old double LP with Jaime Laredo, violin, and Glenn Gould, piano. What follows is not a point-by-point comparison to the detriment of either version of the six sonatas, but reflects my response to the different perspectives each duo offers.

Long ago, my admiration for the Laredo-Gould versions was undercut by the feeling that their rapport managed to be solid despite what seemed to be their occupying two different artistic planes: Laredo's modern violin rich in vibrato (though carefully applied), with lots of sustained phrasing; Gould's piano characteristically "sec," nimbly articulated, patrician even in its occasional eccentricity. They seemed to be thinking about the music differently, yet always paying attention to how they might find common ground and make it work.

No such qualms have any force in the Vinikour-Pine interpretations. Not only is the rapport there, but I also don't sense any stylistic daylight between them. Even in the interest of full-spectrum playing, they never deviate from unanimity of style. My main quibble is that the sound of the harpsichord makes some of the dialogue hard to pick out.

In the Sonata in A major, repeated phrases at the unison or at different pitches in sequence are hard to hear distinctly, whether the harpsichord is anticipating or following up on the violin. When the violin has held notes against a rapid keyboard pattern, then you can easily discern how the harpsichord is answering something the violin has just played, or repeating a figure or phrase it has introduced moments earlier.

The Cedille release's recording balance seems to be keenly judged. I may be expressing a stubborn preference for the piano, because I also like Gould's application of dynamic contrast, which is never overblown, but illuminating. But ornamented lines come across especially well from Vinikour's harpsichord. Some slow movements seem just about perfect in revealing the duo's poise; the Largo of the G major sonata is exquisite.

The trio-sonata distribution of "voices" comes across especially well in the Allegro of the Sonata in C minor, which starts out like a two-part invention, with the violin's entrance adding the essential third voice. At length, however, you become more aware of the forward motion of both instruments, very much united in effect, than you are of just what is being moved. This is not an interpretive flaw, I hasten to emphasize, but something Bach must have gloried in. Some of the distinction between the two instruments was probably meant to be clearer to the performers than the audience.

Indeed, I gained a new appreciation of Laredo-Gould while also preferring Vinikour-Pine in many respects. Along the way, it was brought home to me how both the main keyboard instrument and the main string instrument in classical music became increasingly incompatible as they developed. For all the great violin-piano sonatas produced from Beethoven on, any successful result has had to overcome the inherent polarity of the instruments.

"The contrast between the violin and the piano," noted Elliott Carter in an LP essay about his 1974 Duo for Violin & Piano, "is fundamentally a gestural one — between stroking and striking." And in that work, the late American composer made the most of the dissimilarity. Substitute the harpsichord for the piano, thus replicating Bach's view of the sonata partnership, and you have two stroked instruments. In spite of surface contrasts of the two, the harpsichord's terraced timbres and the violin, with its firm but unbiting 18th-century sound quality celebrated, are most compatible. That's especially true when there is as great a meeting of minds and skills as Vinikour and Pine display here.