Mariel Greenlee retires from Dance Kaleidoscope: here are about ten indelible memories of her dancing


Fans of Dance Kaleidoscope are being asked to bring notes of appreciation to Mariel Greenlee to mark her retirement from the company after performances of "Women Sublime" Oct. 17-20. This is a great idea that has been used once before to mark a previous milestone: the transition of Liberty Harris from active dancer to educational outreach/rehearsal director.

Greenlee will continue to make her mark around the dance and theater community as a teacher and choreographer; her "State of Grace" will be one of three works in "Women Sublime." But her onstage presence in DK programs has been the aspect of her artistry most embedded in our memories.

Here's an annotated list of her stellar performances from the last several years. This is my note of appreciation. I tried to stop at ten, but who's counting?

I'll start with her skill at partnering. She has been half of a number of striking male-female duets in a variety of programs, and she always seems to be the perfect partner. She makes the man, who already looks good (I hasten to add!), look better. It goes beyond physical compatibility to encompass something spiritual and electrifying as well: I'm thinking of her with Timothy June in "Rhapsody in Blue" ("See the Music, Hear the Dance," last May), as well as two earlier 2019 performances, one with Brandon Comer in the second movement of Mozart's Clarinet Concerto (February, "Merry Mozart"), in the Indianapolis Symphony Orchestra's "Paris Festival" (January) with Stuart Coleman in "An American in Paris." 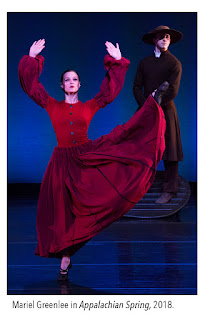 Her strong sense of theater means she puts characterization at the heart of her dancing, along with purity of line. In June 2018 this enabled her to make the necessarily severe contrast to the Bride (Caitlin Negron in her farewell appearance) as the Pioneering Woman in "Appalachian Spring." Without overdramatizing things, she was able to provide the dramatic turning point toward reconciliation in Stephanie Martinez's unsettling "Taking Watch" (May 2015), and it came as no surprise how well she embodied the title character in "Scheherazade" (June 2016).

Her technical discipline, when underlining the meaning of a piece, can produce such illusions as the miracle I remember from part of David Hochoy's inspired choreography for Britten's "Ceremony of Carols." In the number titled "In Freezing Winter Night," she is lifted up by the ensemble, and what still send chills down my spine (I don't think it's just that title!) is remembering how she seemed to be lifting herself up to soar, as if the men holding her aloft were just incidental to the floating sculptural impression.

But I want to focus on a few of the solos. She embodied a song like Jacques Brel's "Marieke" (in Hochoy's "Frere Jacques") with a poignancy that didn't force itself upon us, despite the profound loss expressed in the lyrics. And how strongly she reached into the depths of  lost love's ache in "Losing My Mind"  (from "Broadway Meets Motown," December 2014)! Yet she could also be a surprisingly apt comedian. She was never more delightful than when she danced to "Twisted" in February 2016's "Voices of a Generation." There she gave even grotesque (though adorable) awkwardness a special grace.

I'll end by going back to the heart-tugging side of Greenlee's dancing art. I have to quote myself, just because the freshness of what I wrote at the time commends itself for inclusion in this retrospective tribute.

The work was "Cole!," a salute to Hoosier songwriter Cole Porter. In July 2016, stunned as I so often was by her dancing, I lauded her "pitch-perfect solo to 'Ev'ry Time We Say Goodbye,' with its sudden hints of emotional and physical collapse held in check by the attempt not to see every regretted parting as a foreshadowing of long-term loss. Her phrasing left no doubt as to the difficulty the song portrays."

Difficulty, whether emotional or technical, always presented itself as something natural in her performances. I'm reminded of the remark of a famous concert violinist who said, "When someone comes up to me after a concert and compliments me by saying, 'I can tell you really worked hard on that,' I know I have given a bad performance." The hard work was a given, as it is the standard of this troupe, but Greenlee at her best always seemed to transcend the labor it took to achieve dancing of surpassing excellence. For all the excellence remaining in Dance Kaleidoscope, I must say, on behalf of DK audiences, that once she leaves — to evoke one of Porter's lines in that song —we'll die a little.
Posted by James Harvey at 4:56 AM