In memoriam Raymond Leppard: Out of a vast recorded legacy, here are five personal favorites

I was visiting our son William and his wife, Areli, in Mexico when news came of the death of Raymond Leppard, conductor laureate of the Indianapolis Symphony Orchestra.

Upon my return, I figured that a personal remembrance for this blog would be posted too late.  But yesterday I decided that perhaps a retrospective look focused on recordings of his in my collection might be appropriate. Maybe some of my readers have these, as well as others that I'm choosing to overlook in order to bring out succinctly aspects of the Leppard legacy I most admire.

His learning was immense, but lightly worn. He was a man of strong opinions on music, and, to a journalist covering him, was ceaselessly quotable. He considered France an unmusical nation; he thought Charles Ives an incompetent composer. He maintained that the works for large orchestra by the likes of Richard Strauss, Anton Bruckner, and Gustav Mahler were inappropriate for the ISO's home, Hilbert Circle Theatre.

In salty language, he once scorned the mood swings evident in Mahler's music, and I believe programmed only the gentle Fourth Symphony during his 14-year tenure. Of contemporary music, he said: "There is so much crap — pretentious nonsense" and "I wouldn't touch it with a barge pole." Puzzlingly to me, he declared that Stravinsky could "communicate" (high praise) and Schoenberg could not. He deplored sensationalism: Leonard Bernstein's style was anathema to him, and he considered one year's Side-by-Side Concert repertoire choice, Respighi's Roman Festivals, noisy trash.

Here's my list of five Leppard recordings in which his taste and skills shine with particular brightness. The first 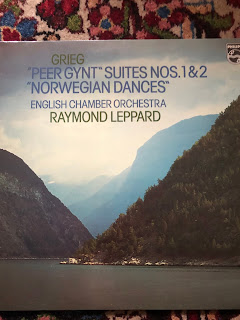 four are Philips LPs with the English Chamber Orchestra, the ensemble with which he made his reputation in his native Britain. The fifth one is the only example of his recorded work with the ISO that I return to with pleasure.

Grieg: Peer Gynt Suites nos. 1 & 2; Norwegian Dances
The performances show thorough respect for the original, modest muse of the 19th-century Norwegian master, and are typical of Leppard's sensitivity to ensemble balance and emotional weight, always well-judged in his work with the ECO.

Mozart and Haydn: Arias, cantatas and songs
No singer compatriot of Leppard's was more congenial to him than Dame Janet Baker, a mezzo-soprano with a well-honed voice fit for the expressive qualities of 18th-century music that Leppard expertly championed. A special treat is to hear him on Side Two as fortepiano accompanist to Dame Janet in Haydn's "Arianna a Naxos" (the final aria may have you weeping for the abandoned demi-divine maiden) and two Mozart songs. On the other side, he conducts the ECO for the mezzo's riveting performance of two arias from Mozart's "Il Clemenza di Tito" and the Haydn cantata "Berenice che fai." 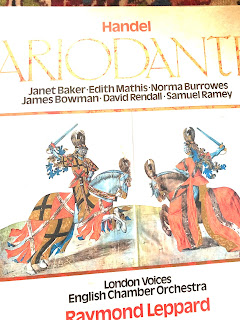 Handel: Ariodante
Among Leppard's Handel recordings, I'm partial to this opera because the story doesn't rely on the interference of witches and fairies, which can be tiresome. But more pertinent to this survey is that the LP set shows through the prism of many voices Leppard's sensitivity to singers. They loved him: in an interview I can't put my hands on now, Frederica von Stade (the ISO's gala opening guest one year) couldn't have been more effusive about her joy in working with the maestro. Baker takes the title role here, but I want to single out how supportive the accompaniment is under his guidance in two contrasting arias with other singers: Dalinda's insinuating "Apri le luci, e mira" and the King's celebratory "Voli colia sua tromba" — and those come up in just the first act. How rewarding it must have been to be soprano Norma Burrowes and bass Samuel Ramey with the lift of such collegiality!

Handel: Water Music
The Saxon who transplanted himself to England, generating an implausible vogue for Italian-language opera and later the more long-lived genre of the English oratorio, wrote music that suited Leppard's suave sympathy with Handel's public resonance in his adoptive homeland. There are many recorded versions of these subtle and ceremonial suites, but this one has durable appeal. Leppard was somewhat less persuasive with Handel's fellow German and contemporary J.S. Bach; a reviewer whose name escapes me pegged Leppard's interpretation of the Brandenburg Concertos as "salonish," which I find sadly fitting. Salon music, by dictionary definition, "usually denotes undemanding compositions...of a lightweight character and designed for private amusement." Not so Leppard's Handel. 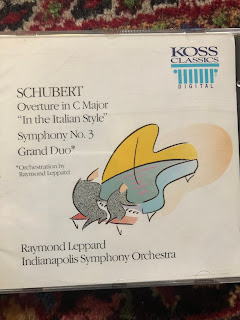 Schubert: Grand Duo (orchestrated by Leppard), Overture in C major ("in the Italian style"), Symphony No. 3.
I once asked Wynton Marsalis (who recorded three 18th-century trumpet concertos under Leppard's baton) what he treasured most about his association with the conductor. The trumpeter, since focused exclusively on jazz, quickly replied: "Raymond Leppard taught me more about phrasing than anyone." I mention that here because the arrangement Leppard made of the Grand Duo, a large-scale Schubert piano duet, is of magisterial importance in how well it converts piano phrases, with their inevitable decay of tone, to strings and winds. That allows Schubertian breadth to draw on new sustenance, especially in the first movement. The music cries out for this treatment: Leppard's "Grand Duo" deserves to be performed at least as often as Schubert's Ninth Symphony. It's the most valuable of the CDs Leppard made with the ISO on Koss Classics.