Butler University launches a survey, under many hands, of the Beethoven piano sonatas in toto 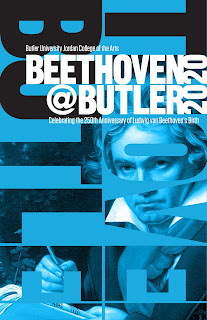 In a live stream Sunday night from the Eidson-Duckwall Recital Hall on campus, Butler University got its survey of the 32 Beethoven piano sonatas under way

"Beethoven @Butler"  has some market zing in these troubled times because of the title's fortuitous alliteration of school and composer, whose 250th birth anniversary is taking a place in a year that can't end too soon for many of us. It's gratifying to herald this series as among the few local new presentations of classical music, pinned to a significant historical milestone, under an official aegis during the pandemic.

Here's a response to Sept. 13's performances that, despite some reservations, I intend to be an encouragement to anyone who reads this blog to virtually attend the rest of the series.

In the first flush of his boom times in Vienna, where the young German had relocated from his hometown Bonn, Beethoven's early piano sonatas came in a relative rush. The "Waldstein" Sonata, which capped the Sept. 13 program, was written only eight years after the titan's genre debut with three Opus 2 sonatas (No. 1 in F minor and No. 2 in A were featured on the series premiere). Professor Kate Boyd pointed out that amazingly brief span in her introduction.

Robert Satterlee's performance of the F minor sonata was sober-sided and minimally inflected. It was largely true to any concept that one readily forms of a youthful work, but I thought an interpretation of more distinct character was needed. There were a few glitches and wrong notes, which made a considerable difference only in a blurred rush at the very end, which Eric Blom deftly described as "a few bars of brilliant triplet arpeggios tacked onto [the recapitulation] as a coda."

Wrong notes were also sadly an occasional feature of Kent Cook's more idiomatic interpretation of the A major sonata — though not enough to throw the performance off track. The Scherzo and Trio came off best.

After two performances with such finger faults, I began to wonder if pandemic-mandated masking might be to blame; I've noticed myself that peripheral vision, which I had always thought of as registering to either side, also is in play at the top and bottom of the periphery. Looking down may thus not be quite as instantly accurate when your nose and mouth are covered and cloth high up on your cheeks.  I'm guessing that knowing a piece thoroughly is no guarantee that a slightly obstructed view of the keyboard will not play hob with precision.

That's my supposition, at any rate, though my inability  to notice it at all marring Shuai Wang's performance of Op. 53 in C major (the "Waldstein") forces me to wonder if masks are an inevitable obstacle that musicians must learn to live with over time. But her performance moved well past the effortful onto the plane of the heroic sublime. That is the "Waldstein"'s home terrain — an "Eroica" for solo piano.  The work's expressive exuberance in the outer movements sometimes yields performances that suggest "I'm keeping up with Beethoven as best I can here — you gotta admire the effort."

I had no such sardonic thought in listening to Ms. Wang. There was sufficiently bright contrast in dynamic levels when called for, even at headlong pace. The effect of surprise was maintained; accents and articulation were unfailingly crisp. The tension imparted to the glissando passage just before a sustained trill announces the peroration of the finale was spine-tingling. Triumph was unblemished throughout.

The whole performance whetted the appetite for revisiting the series and taking in how a host of pianists will make their mark in this repertoire.