Many years ago, in the palmy days of American magazines, a large, heavy edition of Esquire would arrive at our house once a month. My dad's name was on the address label, but I was always welcome to read each issue. Fascinating photos, features, books reviewed by Dorothy Parker, movies by Dwight Macdonald (he rarely liked anything). Sometimes, jauntily risque features and cartoons.

Tom Wicker's "Kennedy Without Tears" was the most gripping memorial piece on JFK I ever read.  The special issue on The Golden Age of Jazz I still own, with its monumental photo of a bunch of jazz immortals in a group portrait in front of a Harlem brownstone. Sometimes, there 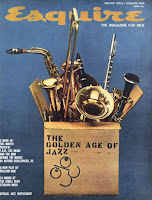 were jauntily risque features and cartoons. There was male fashion wisdom of a degree I have always fallen short of realizing. All in all, despite Hugh Hefner's pretensions, Playboy seemed sophomorically louche and irredeemably frat-boy in comparison.

And Arnold Gingrich, a devoted amateur violinist and the magazine's publisher, engaged Martin Mayer, the first critic of classical music I ever read regularly. Mayer was otherwise well-known as a meticulous journalist about technical subjects involving business, politics, and the law. In his role as Esquire columnist, he was insightful and conscientious in his reviews and interviews across, as I remember, the entire range of Western classical music.

All this is by way of introduction to my review of a new disc: Osmo Vänskä conducting the Minnesota Orchestra in Deryck Cooke's conscientious completion of Gustav Mahler's Symphony No. 10 in

F-sharp major.  Mayer once wrote that there were just two composers -- Mozart and Mahler -- who thrilled him in every piece, yea, in every note that's come down to us under their name. This struck me as something more than saying those eminent Austrians were his favorites or the greatest composers ever. It was saying that they were great in a way that unfailingly reached him and moved him and that he found perfect in detail and overall. They reached him in all respects in toto.

Well, I'm not quite there with Mozart and Mahler, though my admiration is huge. (Some naughty wag will wonder  if an alliterative attraction to the letter "M" may have had something to do with Martin Mayer's love.) Mayer's praise struck me as a teenager as unique and worth considering; who else hired to write about music would be so bold as to declare any pair of composers wholesale perfect?

In the case of this recording, every note famously did not proceed from Mahler's pen, so the Mayer standard may not have to apply, even from those who like what Cooke has made of what Mahler left behind.  For many years the composer's widow, Alma, accepted no reworkings or completions of what her husband's death at 50 in 1911 had compelled him to abandon. Then shortly before her death in 1963 she relented, and many Mahlerians have joined her in approval since.

The Adagio opening movement is virtually all Mahler's, and thus makes a certifiable limit to what Mahler purists among conductors (Pierre Boulez among them) would program. "Here be monsters" in the two Scherzos, less so in the cryptic "Purgatorio" that separates them, and the gargantuan finale, some conductors have implicitly declared, like ancient cartographers doubtful of what lay beyond their known world.

Cooke's completion became known to me years after my regular acquaintance with Mayer's music criticism. I don't have to find every movement beyond the first to have climbed most of the way up Parnassus. They are all idiomatic, however, and display the skill needed to flesh out sketches in Mahlerian terms. The first movement, on the other hand, reaches the heights. Speaking as a listener, not in any sense a composer, I would not change a note of it.

I first felt this with Cooke's version as interpreted decades ago in Wyn Morris' recording with the New Philharmonia Orchestra. With Morris or Vänskä, there is something almost scary about how thoroughly that first movement reaches me: conscientious, inspired use of all the materials, no wasted motion, a sense of the rightness in every phrase, one of the great exhibitions of counterpoint in the rare accents given to that kind of texture in High Romanticism. It's not a matter of sticking a "greatest music ever" label on it. It's just that the movement seems to amount to everything it could have been, everything it had to be. I'm in Mayerland here.

A phrase fondly recalled from the spacey viola introduction will come back in the most uncannily right way. The dissonant climax is so well prepared for, and yet surprising upon every impact. How can that be? That must be part of the definition of perfection in a work of art: every element seems fresh and inevitable at the same time. What was THAT? you exclaim to yourself, and then: Of course; what else could it be? This music breathes the same air as the spirit of the Creator in Genesis: And it was good, saith the justifiably self-satisfied God.

Vänskä handles dynamic levels well, often drawing from his Minnesotans precisely gradual contrasts. Sometimes he seems to go beyond Morris' clarity to display the fullest possible blooms of Romanticism in twilight. Morris, especially in my beloved first movement, hews to a slightly paint-by-numbers explicitness. I have wondered if Morris' having collaborated with Cooke in the studio had the Welsh conductor leaning in the direction of introducing an essentially new work to the world a bit cautiously.
No such restraint seems to shadow Vänskä. The new recording features fine knitting together of contrasting elements, with which this symphony is replete. Such cheek-by-jowl construction has elicited vigorous disapproval from conductors like the late Raymond Leppard, who scorned gratuitous display and prized unity of effect: the focused, unbombastic Fourth was the only Mahler symphony he favored.

The Minnesota Orchestra's phrasing is always shapely, and even transitional material gets enlivening accents. There's an almost bewildering variety of orchestral color in the first scherzo, and in the second, waltzes that flag and sink into sardonic humor, anticipating the woes of the title characters in Stravinsky's "Petrushka" and Bartok's "Miraculous Mandarin."

The finale includes a beautifully played flute solo in the introduction that floats hauntingly like the horn solo in a similar position in Brahms' first symphony. The main body of the movement presents the string sections in the sturdy exposition of the symphony's long farewell. The music falls away into a controlled nothingness Mahler seems to have anticipated for himself here even more definitively than he does in ending his ninth symphony.

For sentimental reasons, No. 9 was conceived as the place where 19th-century symphonists had to close their books. Recordings like this one hint that there might have been much more to come in Mahler's case. But for many years his muse had been death-driven, nudged by her host's heart condition, so who knows? It is fatuous to speculate. We are fortunate to have a complete No. 10. This is not like imagining the Venus de Milo with arms. In the new recording, this feels like the completion of all we treasure about Mahler.