Cut off in mid-career, Roy Hargrove and Mulgrew Miller romp on common ground on 'In Harmony'

Thanks to Zev Feldman and his collaborators, a new two-disc treat from Resonance Records enhances claims on jazz immortality that can be made on 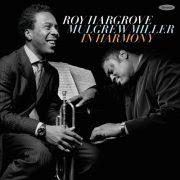 The title "In Harmony" is an understatement, but a necessary one for the sake of brevity. I say that because what the trumpeter and pianist were captured playing on two concert dates in 2006 and 2007 illustrated more than harmony in its formal sense. It also revealed complete rapport between two musicians capable of inspiring each other and shedding new light on a host of popular and jazz standards.

Hargrove and Miller offered their gifts generously at the Kaufman Music Center in New York City in January 2008 and at Lafayette College (Easton, Pa.) in November 2007. Each man, after a wealth of contributions to the music within a brief span of active life, died in middle age — Miller in 2013, Hargrove in 2018.

As his career blossomed, Hargrove deepened his ideas and used his instrumental fluency across a wide spectrum. Exciting in such early recordings as "Roy Hargrove Quintet with the Tenors of Our Time" (Verve, 1994), by the next-to-last decade of his life, the trumpeter had trimmed out some of his flamboyance. Here he is encouraged, perhaps tacitly, by the reflective style of Miller. The result was a thoroughly balanced style for Hargrove, and here the duo concert format puts it on full display.

He could continue to trot out the showboat side, while always keeping his golden tone, in such a standard as "Just in Time." Miller's unaccompanied intro sketches the song's easy delight in a new romance. Then Hargrove ramps that up into an outburst of exuberance.

"Invitation," an slightly exotic favorite of jazz players, has a great Hargrove solo, with his characteristic melodic and rhythmic variety. There is typically a melodic point to every phrase from the trumpeter's horn, as can readily be heard in "What Is This Thing Called Love?", the Cole Porter evergreen that opens the two-disc set.

The duo both personalize their solos, while they play together with thorough meshing of their individualism. Jazz pianists with considerable facility are often tempted to present their chops as substantial when they in fact are giving vent to space-filling decoration. Miller was a little bit like that, though his thorough knowledge of the jazz-piano tradition opened access to something that could usually put the ornamental stuff into an effective context. He finds those contexts repeatedly here.

Other than noting my slight reservations about this much-missed pianist's playing, I can readily conclude that there's nothing substandard about what this inspired duo pours out at length. It's great to have Miller and Hargrove so fraternally and posthumously brought forward on a new recording. Kudos to Resonance for another good reclamation project.