'The Convent' wrings spiritual discoveries from a jerrybuilt community of women 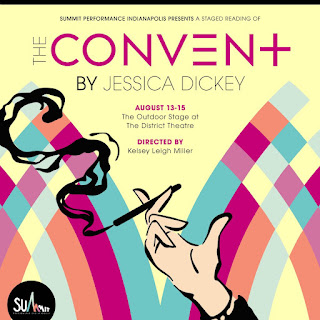 It goes way back: building "safe spaces" for people with fragile links to each other but an overriding sense of belonging to something larger than themselves. What the world writ large may have denied to them they can access through discipline and the paradox of self-denial pointing the way toward self-discovery.

It's the cultural foundation of the monastic communities that helped Christianity flourish in spite of its worldly entanglements from the start. In "The Convent," it's the annual retreat a middle-aged woman who styles herself the Mother Abbess has established in a medieval setting in France and nurtured upon the unfulfilled desires that bubble up out of the flotsam and jetsam of needy participants' lives.

In three staged readings (just two remain) with seven actors under the direction of Kelsey Leigh Miller,  Summit Performance Indianapolis  revels in the sometimes raucous comedy and links it smoothly to the work's probing of spiritual depths. Seen opening night Friday, "The Convent" is an emotionally wrenching drama that withholds most of the hard-won resolutions characteristic of comedy. Interrupted by surprising, often uproarious notions and revelations, it rips through aspects of the retreat's chockablock curriculum, layered on observance of the canonical hours, devotional calisthenics, hallucinogenic vision quests and improvised prayers.

"There is nothing else to listen to but you," the Mother Abbess reminds the six participants at one point. It's a bromide that may well leave all the women back where they started, but promises something much greater: liberation from male religious tropes and their well-stocked barriers to female self-realization. She says the goal is "to become one's own Interior Castle," an image both anatomically suggestive and transcendent.

Jen Johansen radiates the resolve and guarded desperation of the Mother Abbess, whose control and confidence are undercut by the leader's secret agenda.  Each of the six retreat participants is lent vivid individuality by the well-honed cast. At crucial points, eye contact conveys volumes of information. You almost forget that each actor holds the script in her hands. Apart from action conveyed in stage directions (read aloud by Chelsea Anderson), the production seems loaded to its emotional capacity. The succession of scenes is so well-designed that even when an announced blackout seems abrupt, it feels like a full stop at just the right place — a thunderclap that has you eagerly anticipating the next flash of lightning.

At the start, every difficulty is comically foretold by each visitor's panting, profanely expressed annoyance at the steep, stony climb up to the convent. The characters quickly distinguish themselves in these performances by Maria Argentina Souza, Jolene Mentink Moffatt, Andrea Heiden, Suzanne Fleenor, Shawnte P. Gaston, and Stephenie Park. There are a few searing monologues placed among conversations that strain to adhere to, then burst through, the prescribed schedule. That opens with the Mother Abbess' insistence that each woman choose a "nomen" (Latin for "name") associating herself with a female mystic of the Middle Ages whose visionary achievements are meant to guide and inspire the participants.

Not being well-acquainted with the stories of these remarkable women, I knew a little about three of them. Because of her eminence in music, there's Hildegard of Bingen (the town name should be pronounced with a hard "g," by the way); Teresa of Avila, familiar to me from an art-history class in which we were amazed by the suggestions of sexual as well as spiritual ecstasy in a photograph of Gianlorenzo Bernini's marble sculpture; and Julian of Norwich, a modest but intellectually formidable English nun. She wrote better English prose in the 14th century than her contemporary Geoffrey Chaucer, in the judgment of Seth Lerer in his compact account of our language,  "Inventing English."

In a paragraph quoted from her "Revelation of Divine Love," Lerer emphasizes Julian's importance to written English as a vehicle for translating "Latinate religious idiom into English."  Julian credits her ability to communicate Christian teaching to God's example: "I have received it from the revelation of him who is the sovereign teacher," is how Lerer modernizes it.

The word Julian used for "revelation" is "schewinge" (which we would spell "showing"). The Anglo-Saxon  skeleton of English often gives us a way of looking into concepts that words derived from Latin obscure, even though we use the latter all the time.

In this sense, it's easy to admire how this shrewd staged reading carries revelations that may well engage the disposition and stimulate the spirit. But it's through its "schewinges"  that "The Convent" will grab your heart.