Wry trombone musings from Ed Neumeister Quartet in 'What Have I Done?'

Clown and sage, pixie and guru, loyal frontline Horatio to a thousand jazz Hamlets, the trombone has led 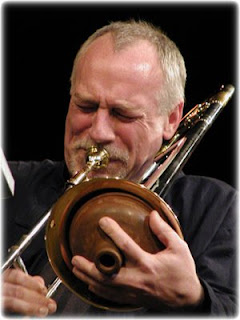 a protean existence in the music's century-plus history. Those several personas — except the farfetched Shakespearean one — are suggested by veteran trombonist Ed Neumeister in his quizzically titled new CD, "What Have I Done?" (MeisteroMusic).

The question resonates in common usage as an expression of regret and remorse, but also as a way of probing the mystery of our acts, particularly in creative fields. One answer to the question in this case is that Neumeister has given his quirks and splendid imaginings prismatic emphasis through his choice of sidemen. The disc displays pianist Gary Versace, bassist Drew Gress, and drummer Tom Rainey as vital participants in the leader's self-portrait as a composer; it also gives everyone brief cameos tucked in between the eight major statements in the form of six  showcases titled "Pickled Ginger."

That's just part of what he and his companions have done. As the first track indicates, there's a varied path for each piece. "Riverwalk" has a broken-up, plunger-muted line from the trombone, supported by the others. It's rhythmically intricate, like much of the music on the disc. After a typically fresh bass solo from Gress, the ensemble comes back, with trombone and piano in sync. Near the end, the trombone is featured on open horn.

The contrast of the two trombone timbres is essential to several other pieces. There's a touch of trombone double-tracking in "Gratitude," placing Neumeister in dialogue with himself.

The leader's jumpy muse settles down contemplatively every now and then: "Acclamation Park" presents the trombone in a lyrical mood, with sustained, open-horn blowing.

Other pieces favor Neumeister's chameleon side, presenting several faces in succession.  I don't know if the track titled "Ridgewood" refers to the Bergen County town I remember as an idyllic suburb where my father grew up and we often visited relatives in the 1950s, but in any case Neumeister suggests an edgier location. After a rhythm-section intro, the leader enters with a growling plunger solo. Later Versace lays down a piano solo that becomes torrential in places. After the final ensemble statement, there's peculiarly choked, sotto voce muttering from the trombone, suggestive of both weeping and chuckling. Neumeister is inviting you to decide which.

After the last "Pickled Ginger," an ensemble statement, comes a relaxed, flowing "Chill'n," which builds excitement logically before another chiseled bass solo yields to some fragmentary band phrases.

The title tune, coming as a kind of summation as the last track, is a reserved lament of sorts. It opens with a muted unaccompanied cadenza; it devolves toward an abstract quartet feature, briefer than any of the tracks that aren't "Pickled Ginger" miniatures. It leaves open the nagging question of what he has done. For this listener, he's provided intrigue and satisfaction alike in a well-integrated quartet setting.