One damned thing after another: Savvy Christian apologetics in "The Screwtape Letters"

The Screwtape Letters, as staged and presented in a return visit to Indianapolis Saturday by the Fellowship for the Performing Arts, makes vivid the struggle the legions of Hell sustain so that more souls can be won for Satan.  It's a battle with no end in sight, even though the Christian worldview declares the outcome to be a settled matter. 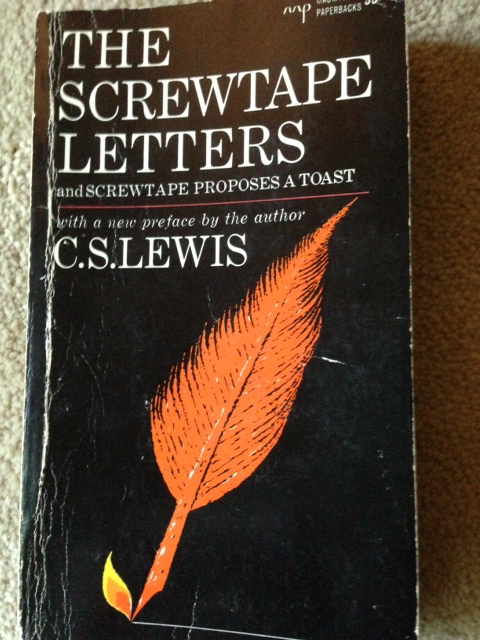 So C.S. Lewis'  little book, considered under the aspect of eternity, is only a snapshot of a few chapters in the war seen from the vantage point of a Christian convert as civilization hung in the balance in 1941. Curiosity drove me  to see how Lewis' florid epistolary style, a model of deliberate irony in the tradition of Erasmus' In Praise of Folly, could be adapted both for the stage and for today's audiences.

Nothing is spared in presenting these letters not only through the well-articulated, protean energy of Brent Harris as the demon Screwtape, but also by means of theatrical spectacle with state-of-the-art sound and lighting design.

Screwtape carries the title His Abysmal Sublimity with relish as he tutors his unseen nephew, Wormwood, in the craft of tempting a particular human being into damnation, assisted by a cringing, scurrying factotum named Toadpipe, who sends Screwtape's letters up an infernal vacuum tube and fetches from them Wormwood's almost instantaneous replies.

The action is wrapped up in the undulations (a favorite Screwtape word) of Wormwood's mastery of his field work. Sometimes the junior demon is unbelievably dense, earning elaborate lectures from his uncle (though the family bond among demons seems quite thin) on what new efforts are needed to defeat the Enemy, God.

The eventual failure of Wormwood in his assignment drives Screwtape to distraction and murderous rage. The show's last few lines posed theological difficulties for me, an agnostic sympathetic to Christian ethics:  Though, presumably, evil spirits can be neutralized, even by their own kind, can they be killed and then eaten as punishment for their errors? Apparently so, just as human beings condemned forever in flesh and spirit provide banquet spreads at Tempter ceremonies; so the show's prologue speech indicates. Lewis put the speech at the end of his little book, where — contrary to Jesus' warning in the Sermon on the Mount -- it seems a case of gilding the lily.

On the one hand, it's hard to praise highly enough the fervor and vocal nuance Harris poured into his portrayal of Screwtape at Saturday afternoon's performance. On the other hand, his acting was the height of professionalism.  So, what's wrong with that? Well, it called to mind Max Beerbohm's warning in Around Theatres that "professionalism is a very dangerous thing,"  and "tends to foster a fatal fluency, enabling a man to say anything anyhow, robbing him, at length, of the  power to express anything from himself."

Harris' performance had that kind of fluency. I couldn't be sure there was much of Brent Harris in the performance, whose very ferocity was thoroughly polished. Maybe this impression comes from the fact that Screwtape is a symbolic representation of everything the Christian convert Lewis sought to put behind him.  He's not a character, but a set of diabolical rhetorical stances. And it's likely that, despite the book's familiarity, there's no individuality in Screwtape that's worth inhabiting. All that Harris can do is bring his professionalism up to an abstract, impersonal standard. A pity, really.

But then, as the public address system played a series of pop songs on the play's themes before curtain time, the Rolling Stones reminded us of the devil's tendency to "lay traps for troubadours." Harris is caught in one, and you can only hope he is well-compensated for his pains.