A playlist for the Donald Trump campaign: Why quarrel with rock stars when you can avail yourself of a dead Austrian's output?

This is supposed to be a performing-arts blog, but I seem to return time and again to the phenomenon of Donald Trump. I can't help it: it's like a tongue probing a sore tooth. My only excuse is that Trump commentary has gone way out of proportion with all sorts of social-media commentators. No one else can help it, either.

It's too late to make amends, except insofar as I can tie the Republican nominee to a matter of artistic importance. That's what I will now do. I've been wondering why candidates, particularly Republican, run into so much trouble choosing recorded music for their rallies and other campaign appearances. The musicians unwillingly selected to have their music blasted at crowds eventually object. This goes back at least to the predilection of the Ronald Reagan 1984 campaign for Bruce Springsteen's "Born in the U.S.A." The Boss told the Great Communicator to cut it out.

Misunderstandings have continued. As odd a choice during the current season is Trump's use of the Rolling Stones' "You Can't Always Get What You Want." They have objected, too. The song is not as wrongheaded as Reagan's choice, but still you wonder: What can Trump have been thinking?  Clearly, music without lyrics might be the way to go for politicians eager for pizazz: stirring music, expansively laid out, great gobs of it in the public domain, and largely free of problematic texts. Yes, classical music— and I mean pieces with heft and a range of sonority suitable for public-address systems. broadcast commercials, and studio interviews.

Specifically, I think the Trump campaign should associate itself with the symphonies of Anton Bruckner (1824-1896). This is not because of any temperamental suitability between the two men. Far from it: The Austrian composer was remarkably provincial, unpolitical, and self-effacing. True, he resented encountering the Viennese buzz saw — the anti-Wagner, pro-Brahms claque — when moving to the capital to teach, and he prided himself on his academic standing. Otherwise, he invested all his ego strength in making music, and was notoriously malleable about how his works reached the public, accommodating to a fault. This has given scholars and conductors lots to untangle in the matter of editions.

I will set aside the rumor, which I have not been able to authenticate, that Adolf Hitler's favorite composer was not Richard Wagner, but Bruckner. Hitler comparisons to prominent bad guys today are a dodgy game, and besides, Trump comparisons lean more toward the strutting, pouting figure of Benito Mussolini, whose fascism bore a stamp all its own and took power in Italy well before the Third Reich.

In the spirit of humble charity and for the love of Bruckner rather than Trump, I offer these five suggestions of musical accompaniment to five different aspects of the GOP nominee. They might be played in whole or in part to suit the kind of Trump campaign appearance on the schedule or the candidate's mood at the time.

1. The tragic Trump. This is the candidate in the dark mood of his acceptance speech at the convention in Cleveland as well as in his dour analysis in a Washington Post interview that, if he loses, it means the November election is rigged. Bruckner's music rarely wallows in anything you might associate with doubt or despair; his Catholic faith was the foundation of everything he wrote. But a melancholy cast lies over the Adagio movement (the second) of the Symphony No. 5 in B-flat, keyed to a reflective oboe solo that conveys a tinge of doubt. A contrasting theme for strings might suggest the difficulties the nation is likely to sink into if Trump is not elected, in the view of the candidate and his supporters.

2. The authoritarian Trump. The man who pointed a forefinger at the convention TV cameras and said "I am your voice" and "I alone can fix it" may be well served by music when he has this sort of message to emphasize on the campaign trail. I am recommending the first movement (Allegro moderato) of Symphony No. 7 in E major. The opening cello melody, a calm stride subtly supported and then taken up by higher instruments, exudes  the almost hypnotic self-confidence that the candidate clearly hopes will solidify the electorate's concentration upon him as a national savior.

3. The friendly Trump. This is the candidate who basks in the crowd's adoration, once the protesters have been dispatched, the man who says "I love you" over and over.  Trump without a hint of threat is a rare creature, but such infrequent episodes are well matched with the sunny Scherzo: Molto vivace of the fifth symphony. Michael Steinberg rightly notes the "sense of caprice" that characterizes the Trio section — a rare aspect of Bruckner that has its parallel in the fleeting exhibitions of Trump amiability.

4. The scattered Trump. As I've just hinted, Trump moods are unstable, and his public talk matches them in its frequent lack of focus. His now disparaged co-author ("The Art of the Deal") has come out with assertions that Trump is characteristically impatient, with a short attention span. The Washington Post interview mentioned above included four occasions when Trump's attention wandered to a nearby TV monitor, particularly when his image appeared. Bruckner was by no means a scattershot or easily distracted composer, but I've chosen the Scherzo movement of his Symphony No. 2 in C minor because its main theme leaps about in an unusual manner, and the form's conventional contrast (the Trio) also features larger interval skips than is usual in Bruckner's music. Then there's the way the brass keep cutting in, a bit startling every time, like a Trump digression or mental spasm. 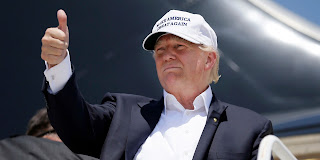 than that of our composer. That's putting it mildly. But Trump's slogan "Make America Great Again" picks up a theme he sounded early in the primaries, when he attempted to distinguish himself from his many rivals by portraying himself as an outsider, a non-politician. He painted the GOP norm with the same brush as the Democratic norm, both part of the status quo, which he promised to look beyond and act against. The analogy is to the "heaven-storming" musical rhetoric in Bruckner, which is abundant. It was second nature for the devout composer to look beyond earthly reality; he too yearned to be "great again," but he meant great in the divine presence. So I have chosen for the "great again" Trump the opening  movement of Symphony No. 9, which Bruckner dedicated explicitly "to the beloved God."


I look forward to seeing the alliance of Bruckner and Trump in the public sphere. They have a couple of things in common: They are both prone to make the same succinct, forceful point over and over again. And, just as Trump likes to promise Americans "we are going to win so much you're going to get tired of winning," many lovers of symphonic music get tired of Bruckner's winning ways long before Bruckner is done. It's just that one of them ends up in the empyrean, bowing before the infinite majesty of God and nature; the other....