There's no tangle ending up in Charlie Brown's nemesis tree when it comes to the musical deftness displayed in "Kites and Strings" (One Trick Dog) by Ben Rosenblum's Nebula Project. 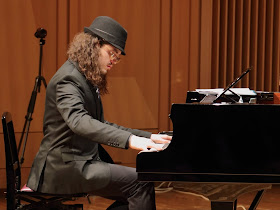 This is a well-designed set of balanced ensemble jazz, with solos inserted aptly. When Rosenblum reaches far afield for material — as in a folk song picked up from a Bulgarian women's chorus recording and a tune from Brahms' Fourth Symphony — he always makes it suit the players and the sound terrain that his band calls home. Same with his visits to the Leonard Bernstein and Neil Young songbooks.

Besides the leader, the group consists of Jasper Dutz, tenor saxophone and bass clarinet; Wayne Tucker, trumpet; Rafael Rosa, guitar; Marty Jaffe, bass, and Ben Zweig, drums. For the two borrowed pieces, Rosenblum brings in Jeremy Corren as pianist for the Brahms and Bulgarian tracks. Cameo guests add rich flavor to "Bright Above Us" — trombonist Sam Chess and vibraphonist Jake Chapman. (Separately, the trombonist and the vibist also guest on one other track each.)

I was struck by Tucker's tart but cheery tone, which gets a good outing initially in Rosenblum's cruising tribute to Cedar Walton, "Cedar Place."  The disc's characteristically deft management of solo and ensemble contributions is illustrated here, and also shows up significantly in the title track. It's neatly put together and conveys a soaring feeling appropriate for "Kites and Strings."

Dutz's bass clarinet lends heft to the arrangement of "Halfway to Wonderland," coursing nimbly along the bottom. The accordion leads significantly throughout the band's take on Brahms, with the soft-spoken piano solo setting up Rosenblum's enchanting solo turn on the accordion.

Bernstein's "Somewhere," another rare borrowing for Nebula Project, enjoys a straightforward treatment of the melody. As the emotion swells, there is some heat applied to the trumpet solo, heaven-storming guitar from Rosa, and a good display of Rosenblum's piano chops. Nothing is overstated.

For any of his originals, the clever Rosenblum seems to be careful not to gild the compositional lily, even given the anthemic veneer of "Bright Above Us." The temptation is most yielded to near the end, but gets checked convincingly by what follows.

It's the bop-derived "Laughing on the Inside," which goes from direct high spirits into a slow, rocking groove that suggests that crying on the outside is also involved. "Izpoved," the Bulgarian folk song, dispenses with drums entirely to present the band in luminous, pseudo-chorale formation.