As a particularly challenging winter approaches, release of a new "Winterreise" is timely

In a time when we are drawn into the maelstrom of our individual emotional centers, finding human interaction risky and often ill-advised, Winterreise, Franz Schubert's most inward-looking song cycle, 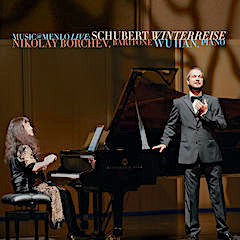 has a unique appeal in the year of the plague.

The settings of 14 songs by Wilhelm Müller, composed in the next-to-last year of Schubert's life (1827), still have a chilling valedictory effect, thanks to their inspired fusing of words and music. Winterreise  is especially welcome in a Music@Menlo release performed by Nikolay Borchev and Wu Han.

The Russian baritone has taken the measure of the footsore progress of a trudging wayfarer who's trying to actualize a death-wish that has burgeoned from the failed love affair referred to in the opening songs. Winterreise is the embodiment of all failures of the sort that seem to sum up personal existence whenever the heart's deepest desires are thwarted.

Often known as Die Winterreise, the song cycle has by common consent dropped its title's traditional article (Die = the)  to emphasize the composer's intent to universalize its emotional heft. Its particulars (solitary wandering in a snowy pre-industrial landscape under the burden of despair) have an uncanny connection to feelings of isolation that may overtake anyone from time to time. We may all find ourselves on a "winter journey" shortly, with a great variety of diminished resources for dealing with it.

The pianist Wu Han, co-founder with her husband, cellist David Finckel, of the Music at Menlo festival  in the Bay Area, is an extraordinary partner for  Borchev. Together, they make especially vivid the more restless songs, such as Die Wetterfahne (Weather Vane) and Auf dem Flusse (On the Stream). Both songs are notable for the protagonist's identification with the phenomena he encounters on his lonely trek. Representations of peace like Der Lindenbaum (The Linden Tree) tend to be imagined sources of release from life's troubles. Making more explicit all the interior drama is an outstanding feature of this performance.

I once attended a lecture by the much-admired Kurt Vonnegut in which he plotted on a white board the movement characteristic of some literary predecessors' work. Variously up and down went each line on a simple graph from the meeting of the x and y axes, each representing a writer's typical story trajectory on a scale of happiness and misfortune. After drawing his suggested lines for a couple of other fiction writers, Vonnegut said: "And here's Franz Kafka." The line began below the x-y intersection, then plunged downward off the chart.

That's Winterreise. The verse, and thus the meaning of the songs as performed, sticks closely to the journeyer's despair as reflected in what he sees along the way. These songs have hardly a hint of escape or relief, except for the kind of delusion that overcomes the man near the end (Die Nebensonnen [Mock Suns]). There is no metaphysical aspect to these songs; German spiritual romanticism is deliberately hemmed in by text and music alike.

The performers have to settle into the bleakness of the cycle and find variety within the music's shades of gray. Borchev and Wu Han do that superbly. For comparison, the benchmark performance of this music on record is the 1962 collaboration of Dietrich Fischer-Dieskau and Gerald Moore. The pianist is deferential to the singer there, perhaps to a fault; Wu Han is more expressive, without overshadowing the singer. Fischer-Dieskau dares a wider dynamic range, and if I were to fault Borchev in that area, he is less observant of the very soft singing sometimes called for. I will give him high marks for his projection of the cycle's raw emotion; there is in Fischer-Dieskau undeniable commitment to the songs' expressive meaning, but he is slightly patrician in manner.

This new recording can be recommended without hesitation for its strength of artistic vision and  the unshakable rapport of the artists. And coincidentally, since the Menlo festival like so any others is in pandemic-forced suspension, this 2019 performance is a beacon for our troubled times and the need to resist through art the narrowing of sensibility that threatens all of us now.