Jorge Federico Osorio gathers his own anthology of French music, centered on Debussy 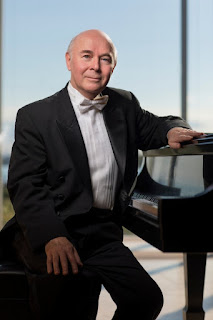 A native of Mexico who is now successfully based in Chicago (faculty member at Roosevelt University’s Chicago College of Performing Arts),  Jorge Federico Osorio recalls encountering French piano music as a child, hearing his mother play it. Later he studied in Paris with Bernard Flavigny and Monique Haas, refining his aptitude for that repertoire at the start of his career. A new recording crowns that durable acquaintance.

"The French Album" (Cedille Records) is set up as a program that rewards hearing it as if in recital. The disc's design is just part of the attraction. There is also a recording acoustic that's just resonant enough to flatter Osorio's glowing touch. Best of all, there is the pianist's mastery of balance and tone, applied to an intuitive understanding of the music's meaning.

The program opens and closes with the two most familiar pieces to bring forward the ancient dance form called the pavane: Gabriel Fauré's piece of that title and Maurice Ravel's "Pavane pour une infante défunte." The bulk of the program consists of Debussy preludes, with two of them separated as a pair to emphasize their thematic connection with other Spanish-inspired music, introduced by Emmanuel Chabrier's deft "Habanera" and followed by Ravel's  exuberant "Alborada del gracioso" and his classically restrained tribute to a deceased Spanish princess (not one in particular, but an evocation of the era in which such a royal child once lived).

Apart from a distinctive reading of the familiar "Clair de lune" (from "Suite Bergamasque"), the Debussy selections come from his two books of preludes. The close-to-definitive recorded versions of this music remain Walter Gieseking's performances, which have an uncanny richness of color despite their decades-old monaural sound. But Osorio is no slouch in this essential department. I was charmed by his rendition of "Voiles" (Veils/Sails) and moved by the rightness of tempo and the weight given to chords in "La Cathédrale engloutie" (The Sunken Cathedral).

Osorio brings forward the hints of modernism in "La terrasses des audiences du clair de lune" (The Terrace of Moonlight Audiences), and he limns the narrative and pictorial progress of "Les collines d'Anacapri" (The Hills of Anacapri) perfectly. Such contrasts are also made more vivid than usual by Osorio in "Alborada del Gracioso" (Morning Song of the Jester), whose rapid repeated notes sparkle and whose contrasting faux-maudlin tune evokes a slightly daft street singer.

Ravel's essential classicism is well-defined in his pavane, which plays off the sensitivity displayed earlier on the disc with three florid yet well-grounded pieces by Jean-Philippe Rameau. Osorio takes some of the shimmer off his tone to render the Baroque master brightly and idiomatically. Further mastery of Debussy is evinced in a show of flamboyance with the quiet swagger imparted to "La soirée dans Grenade" (Evening in Granada) and the pyrotechnics judiciously applied to "Feux d'artifice" (Fireworks).