'Cheap Thrills': On the right side of Rick with the South Florida Jazz Orchestra 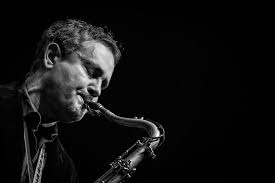 Rick Margitza occupies center stage in "Cheap Thrills," the unprepossessing title of a worthwhile set of his compositions and arrangements on Summit Records. The opportunity, fully taken advantage of, is a release by the South Florida Jazz Orchestra, directed by Chuck Bergeron.

All the saxophone solos on the nine-piece program are taken by Margitza, who got international exposure as Miles Davis' tenorman in the late 1980s and has been largely independent since. He provided the SFJO with all the arrangements, which are witty, expansive, and stylish in the modern big-band tradition. The touches of virtuosity required of the ensemble are handily dispatched.

Margitza seems to like to lend a swiss-cheese texture to his charts; there's a lot of staccato bounce to such pieces as "The Place to Be" and "Premonition," keeping the sections on their toes. The rhythmic profile is lively but not overbearing, though I felt the languid samba cruise through "Embraceable You" to close the disc was a bit tedious, except to display as a farewell gesture Margitza's graceful facility as a player. The form of his writing is far from predictable; he allows himself one blues, which galumphs happily and seems to salute a canine companion: "45-Pound Hound."

Guitarist John Hart and trumpeter Brian Lynch are guest soloists, providing cameo highlighting to add to the attractiveness of this release. When Margitza solos, he doesn't play second fiddle to anybody. That's not a matter of being dominant and aggressive about what he has to say. It's more a matter of saying something apt and, not surprisingly, appropriate to the settings he has designed for the band. "Brace Yourself" is a good example; Margitza's excellent solo is by no means topped by John Yarling's drumming showcases, and there are two of them.

There's also the ensemble virtue of end-to-end composition. A track's typical wrap-up doesn't depend on an out-chorus largely repeating what we heard at the beginning. There's new stuff: "Walls" opens with hymnlike solo tenor and trombones; then it hits its stride. After a riveting piano solo by Martin Bejerano, the shift into the final ensemble choruses brings into play a fresh imaginative take on the material.

If the cleverness is sometimes stretched out a little too much — I had had quite enough of that big dog before "45-Pound Hound" reached the final double bar — on the whole the set is properly effusive and celebratory of both the band and the honoree: the protean Rick Margitza.