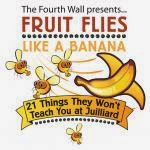 IndyFringe varies, and while we expect that  when it is good, it is very, very good. Word must get around fast, because people were streaming into Cook Theatre Friday night for the second IndyFringe performance of "Fruit Flies Like a Banana" by the group Fourth Wall.

A best guess is that no one left disappointed, and that everyone had fun watching these zany musicians go through their contortions and circus-type choreography as they play music. Note: their musicianship does not have to take second place to their delightful shenanigans.

They design the show to move fast so they can complete their assigned task in 60 minutes with a visible timer so the audience knows they are on track. The introduction to this show informs us that Time flies like an arrow . . . Fruit Flies Like a Banana. Thus we learn that everything they do might just tip reality.

The basic theme, "21 Things They Won't Teach You at Juilliard," briefly stumbled when they asked the audience to name the best music school in the world. Someone shouted out "IU" but they managed to get the right answer across: Juilliard, a music school none of them attended. Flutist Hilary Abigana went to Eastman, trombonist C. Neil Parsons went to Oberlin, and percussionist Greg Jukes went to Peabody. None of these schools is exactly disreputable, and sure enough, with the fine music education these three have had, they easily (and hilariously) demonstrated some skills that could benefit not only Juilliard students, but music students from everywhere.

How do they do what they do— performing while dancing, upside down, coasting on swivel chairs, and engaging in other activities that are never seen in a recital or advocated by music teachers? Obviously, they work very hard and practice, practice, practice. Some of the games require the split-second timing of a high-wire act, and they had nary a tumble. On top of all that, they take turns dashing down to the audience to request an audience member to "Pick a card, any card." The chosen card determines the next vignette in their program. The audience became so enthusiastic during the program that sometimes their exuberance covered up the reading of words on the card, but eventually the "lesson" became clear.

We learned how to spell "onomatopoeia." We heard an elaborate piece featuring the flexatone, an instrument invented in the 1920s.  We saw that silence is golden, as they mimed playing their instruments in a very convincing manner.

Some of these "lessons" required the skill and coordination of highly trained modern dancers, such as riding around on the vibraphone, or carrying a baritone player on your back. Such antics brought down the house, and these daredevil musicians deserve every accolade they receive.

Musical oddities included a performance of "Bydlo" (lumbering oxcart) by Mussorgsky.  I doubt that any of the orchestrations of this piece conceived of a performance for flute, trombone and vibraphone with the musicians cavorting in madcap fashion.

Another lesson, "Boomwhackers Are Awesome," actually had two parts, with the second being an elaborate performance of Bach. Again, unconventional, but incredible!

Fourth Wall started in 2010, and all three musicians have previously performed with Tales and Scales, a "music-telling" ensemble in Evansville that started in 1986. So far Fourth Wall has been self-contained with no outside direction, but that may change with a project they have planned out east. The three have recently moved to Massachusetts, but we are fortunate that they came back to Indiana for IndyFringe. 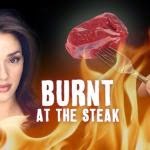 Life stories can be a staple of one-person shows, and so far I have seen three of this genre at IndyFringe. Carolann Valentino's "Burnt at the Steak" at the IndyFringe Basile Theatre ranks near the top in talent, charisma, and sheer showmanship. As both the author and performer, her effervescent and high-energy show dazzles as she cavorts and modulates her portrayals through always appropriate body language. She is especially adept at conveying raw sexiness, which becomes a bit raunchy with the male audience members she calls onstage to assist in certain scenes. Fortunately, these Fringe fans are not surprised and cooperate fully, and clearly enjoyed the attention.

Basically, she leaves her Italian family (who had trouble adjusting to Texas, or perhaps Texas had trouble adjusting to them) and heads for New York to audition for Broadway. But expenses require her to take a job managing a fancy steakhouse, where she learns to deal with a haughty maitre d', strange customers and staff, awkward situations, and a psychic mother who telephones her much too often to remind her to get to the auditions. Presenting 18 characters through song, dance, facial expressions, and hair-tossing, she manages to make the characters vivid in all their weirdness. We get the idea that everyone conspires to keep her from her New York auditions.

Along the way we are treated to a new version of "Do-Re-Mi" (from "The Sound of Music") that explains meat temperatures. Another parody, to "Moon River," seems equally incongruous with the original lyrics, which makes it that much more effective for her purposes. CarolAnn sentimentally steps out of character near the end to announce that this is really her true story, and she urges everyone to follow their dreams. Before this can become mawkish, she immediately steps back into the sassy character who has mesmerized the audience from the beginning.

Valentino sings and dances with pizazz, and possesses the ability to carry the audience with her wherever she wants to go. Her show has been named "Best of Fest" in at least six Fringe Festivals. With a bit of madness, a bit of whimsy, and a well-defined purpose to her shtick, she weaves her spell with gusto and doesn't waste a minute.