One can't really criticize very young student dancers, especially when they are part of "Kids Dance Outreach," which is "a preventative program designed to equip young, at-risk elementary school children with the discipline, confidence, persistence, determination, social consciousness and cognitive developmental skills that can prepare them to achieve success."

Making a guest appearance with Motus Dance at IndyFringe at Theatre on the Square Mainstage Friday night,  the children formed two lines and were given choreography appropriate to their age level and ability. Perhaps if they had appeared in smaller groups, both onstage and in rehearsal, then they might have stayed together more often, but this is a bold and creative venture which can have only positive results for these children. They appeared again in the final number "Bow" with the other dancers in an attempt to acknowledge the hard work of everyone. 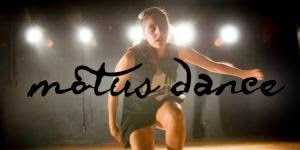 Motus called their program "Shattered" because they hope to "break some misconceptions about what dance is."   Their stated mission is to create and cultivate "beautifully different dance by providing a home for collaborative and individual expression."  Founded in 2003 and with a studio in Fountain Square, Motus offers an outlet for guest choreographers and provides dance programs in venues as varied as IndyFringe, Garfield Park, Anderson University, Central Library, charity events, etc.

The eight women, clothed in simple but effective costumes, moved as a well-rehearsed group with choreography suited to them. As Executive Artistic Director Heidi Keller Phillips announced before the program, Motus is a home for expression, but the dancers also have other careers. As she said, they want to "have their cake, eat it too, and share it with you."

Much of the movement seems to evolve from a motif, with establishing tableaus and then moving in and out of them a strong feature.  Relationships are formed and then dissolved, and sometimes the pace seems almost minimalist, but other times everything happens quickly Shoulders and arms circle  frequently, with one dance incorporating finger-shaking as well. One quirky feature is that almost every choreographer represented utilized a twirling of ponytails, which every dancer had, though in varying lengths. But after a while this became a tired cliche. One dance had the women falling down so frequently that this too became a cliche.

Lighting was mostly subdued, though occasionally a sudden change in lighting did not seem to coordinate with what was happening on stage. As for the music, none of it was familiar to me, but perhaps I am in the wrong generation.

These dancers obviously worked hard, and showed signs of thorough rehearsing. While the titles of each work gave a brief insight into the structure, perhaps a paragraph detailing the choreographers' goals would have been even more enlightening.


Did you ever see a comedian who read from a script? This was a new experience for me during "Ghosts Are Frightening and Instructive" Friday night at the Phoenix Frank & Katrina Basile Theatre, featuring Cody Melcher from Chicago. According to his website, he is an experienced comedian.  From an interview posted by Kris McDermott: "He’s all over Chicago–  he hosts a podcast called Tomefoolery, produces the Double-Shot Showcase, writes for Talk Hard. Cody was recently a finalist in The Advocate’s “Stand Out: The National Queer Comedy Search.” "

So why did he mostly use a script and then talk so fast? Yes, he looked like a dapper gentleman in his formal tux and purple hair, with suspenders hidden neatly under his vest. His vignette at the Wednesday Fringe preview about the awkward etiquette problems of two gay men dining together came off very well without script. And when he included the same vignette in his Friday night show, he also did it without script. But for much of his monologue, he seemed wedded to the page. Reading hampers the spontaneity of comedy, and while he still got laughs, the effect was just not impressive.

He focuses on his own life experiences, including the dark side, with family problems alluded to and his travails with a pet dog named Boo. Influential TV shows played a large part as well as a mixed  report on his personality, which just went on too long. The homosexual stories and jokes of an openly gay man were not particularly shocking, though this is not a show for children.

Altogether, despite some admittedly witty laugh lines, my overall impression was disappointing because of his reliance on the script.  Comedy should have a freedom about it that just isn't possible when delivered from pages which then must be turned  — and turning pages is a distraction for a comedian and the audience.