Weekend IndyFringe report (part one): joyful self-liberation vs. kicking against the pricks

Three shows I saw this weekend reminded me of the hurts we inflict on ourselves as we search for who we really are. To be defined by others — perhaps even from birth, and certainly later by social constructs —  is for many people unsustainable. The niceties have to be overthrown.

For the men of Wabash College, that may mean the behavioral constraints that define "gentleman" in traditional terms. For a young, passionate libertarian, the crisis may take the form of a night in jail or selection as a delegate to a Republican convention. For the young of both sexes in a sexualized culture, it may be a brutally obscene attempt to reconcile their desires with an identity they can claim comfortably as their own.

Such conflicts, serious as they are, generate much of the anarchic quality of comedy, including a strain of blasphemy that has ancient roots.  I have an LP called "A Medieval Christmas" that ends with a realization of French music from the Feast of Fools. The celebrants lead into church an ass, whose imitated hee-haws replace "Amen" in the refrain of a hymn called "Orientis partibus."

Though the Church tolerated no outright sacrilegiousness, crude revels saucily linked to the inhibitions of Christian culture remain with us in New Year's and  pre-Lenten celebrations. In some countries today, such hearty partying provides thousands with an elaborate, scheduled release from everyday life. Hierarchies are upset, decorum is overthrown, self-rule gives way to misrule.

A considerable part of IndyFringe is a Feast of Fools. As a visitor, you have to choose carefully if you don't want your world to be turned upside down—  if you don't want your mind and heart mooned. Indecency is proposed as a tool to prime the engine of enlightenment. Your safety is not guaranteed. We are kicking against the pricks, as the Bible says, and if we're lucky, it hurts so good.

Do we have too much of this in our culture today? Perhaps, but the release from life's inevitable restraints is always tempting. As the conductus introducing "Orientis partibus" says (from the translation in the LP booklet): "Away, today, with jealousies, away with all grief; those who keep the ass's feast seek happiness." 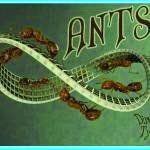 My first exhibit in the #fringe14's  asinaria festa is "Ants," a flowing set of sketches written by Sharla Steiman and performed by the Arden Theatre Union. With unflagging gusto, four young men and women inhabit scenarios of seduction and power. Confusion and clearheadedness are surprisingly not-so-strange bedfellows.

Steiman presents intimacy as inevitably fraught with the friction of conflicting desires. If you ride in someone's car with them, what else might you be prepared to do? Where do the boundaries come from? What stands in the way of your freedom is a shape-shifter — is it conscience, cowardice, or convention?

Directed by Ty Stover and Jaddy Ciucci, the show throws banal vulgarities around as well as insightful engagement with the universal search for personal meaning. "Why I am here is to be free," one character plaintively declares. The show's governing image explains the title: An ant walking along a Moebius strip travels on both the outside and inside, while remaining on the same surface, Steiman has a character point out. External pressures and internal forces combine somehow to direct each of us on one journey. No wonder we struggle so to determine which is which.

Since freedom is an obsession for those who identify politically as libertarians, Phillip Low's "Indefinite Articles: A Libertarian Rage" (ComedySportz Theatre) fires up his verbal kiln to white heat.  After launching his show with an odd folktale with the likely moral that curious people endanger themselves, Low becomes defensive. He won't stop asking questions, and he welcomes confirmation of his skepticism from any quarter — whether from corporate Republicans or corporate Democrats, or even from a tense night in jail on an unspecified charge.

The torrential set-piece of "Indefinite Articles" is a bizarre sexual fantasy involving Sarah Palin, in which the celebrity politician is turned on by Low's rapid quotation of lumpy economic theorizing from the likes of Friedrich Hayek and Milton Friedman. Liberation through extreme tastelessness may be Low's most powerful self-help prescription.

His precursor in this mode is Paul Krassner of "The Realist," a scurvy periodical that yoked graphic obscenity and political satire most memorably in a post-assassination scenario that had Lyndon B. Johnson humping (as we used to say) the exit wound in JFK's neck on Air Force One. The image was so appalling at the time that some Mainstream Media commentator (I forget who) provided the best inadvertent humor of the era by solemnly informing the public: "The incident, of course, never happened." I love that sentence, especially the pursed-lips placement of the phrase "of course."

Speaking of the Sixties — ah, "fair seed-time had my soul" — how little today's potty-mouth entertainers may realize what they owe to that era's most controversial comedian. George Carlin was a wuss in comparison. "Lenny Bruce died for your sins," I'm tempted to mutter as I recall this troubled genius running afoul of the law with merely an f-bomb or two. Nowadays it's carpet bombing.

The lads in "The 10 Simple Rules to Become a Gentleman" at the 800 Bloc Theatre parody what are presumably the lofty expectations of students at Indiana's all-male Wabash College. It's a great Feast of Fools takedown of behavioral codes. The show is violent, sentimental, scabrous, and obscene. In other words, good frat-house fun.  There may be an underlying pathos,  insofar as these brawling, boozing buddies are hoping for an antidote to testosterone poisoning — and failing to find it. Their grappling and groping also flirts with homoeroticism. But that's another Gentleman Callers show, perhaps.

Though the spirit of the show is rigorously anti-introspective, the embryonic gentlemen act out the 10 rules in a flailing search for authenticity almost as heart-piercing as that of their contemporaries in "Ants." A gentleman "never swears gratuitously," one rule says, but is free to ungratuitously deconstruct a Shakespeare sonnet in order to salaciously flatter a young lady. As for the rule that a gentleman "never gets embarrassed," the ironclad self-regard of these young men makes them nearly immune from that.

In fact, all three of these shows carry around with them a kind of self-righteousness that keeps them from being wholly endearing. You don't thumb your nose while blushing, after all. And you don't flaunt your freedom and specialness noisily if you're inclined to ruminate. Case in point, again rooted in the 1960s: On the old Dick Cavett Show one night, Mort Sahl, a self-described "ex-nightclub comedian," was becoming tedious talking about the dearth of "intellectual actresses" in New York theater.

Cavett asked his other guest, the drama critic John Simon, what he thought of that assessment, which jawdroppingly combines sexism and snobbery. "I would imagine there are as many intellectual actresses," Simon replied, setting up the perfect squelch, "as there are intellectual ex-nightclub comedians." Judging from the subsequently tense atmosphere on the live broadcast, the host evidently had to patch together an armed truce during a well-timed commercial break.

Nothing gets a comedian to be serious faster than having his ego deflated. By the same token, Fringe performers must realize they're courting that possibility by treading the boards at this glorious Feast of Fools. And any one of us could be growing ass's ears as well. We're all just seeking happiness, aren't we?